Blenheim over the Balkans

This is the story of 211 Squadron RAF and its service in the Western Desert and Greece during WW2. The author served in the squadron and has researched the operational history and that of its opponents over a 25 year period. This is all brought together in this book. 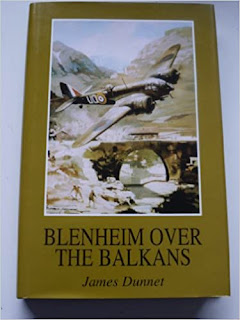 The Bristol Blenheim was a twin-engined light bomber with a crew of three. In the 1930s, when it first entered service, it was as fast as most fighters. However, the introduction of monoplane fighters meant it was vulnerable to being interdicted. It ended the war as a night fighter and reconnaissance aircraft.

211 Squadron was in the Western Desert when on 23 November 1940, they were sent to support the Hellenic Air Force in operations against the Italian invasion. The crews were delighted to escape the desert and go to Greece's fresh air and green landscape during winter. The Greeks were very welcoming, and the pilots and aircrew were welcomed as they visited Athens when off duty. They were initially based at Tatoi Airport outside Athens. Today it is still an airbase and the home of the Hellenic Air Force Museum.

They had more crews than aircraft initially and so didn't have a dedicated aircraft. The main targets were the Albanian ports of Durazzo and Valona, typically with four 250lb bombs. They were only to attack if there was seven-tenths cloud cover to avoid interception by Italian fighters. The Blenheim relied on a single light machine gun in a turret as defensive armament, which enabled them to fight off the CR42, but not the latest Italian monoplane fighters.

The RAF dropped 500 tons of bombs during the campaign, which was small by later standards, but the Blenheim had a small bombload. The RAF destroyed 259 enemy aircraft with another 99 'probables'. 72 RAF aircraft were lost in combat, and 55 were lost to ground strafing. A further 82 had to be abandoned or destroyed on evacuation.

The author describes a number of the operations and something of the life of the pilots and aircrew living in Greece. Their war ended when the remaining six aircraft of the squadron were shot down by German Bf 109's on Easter Day 1941. The Luftwaffe deployed around 1,000 aircraft in Operation Marita.  The author tracked down the surviving German pilots and includes their stories as well. He has also recovered several logbooks and other documentation and interviewed surviving members of the squadron.

This is an impressive piece of research, which gives an interesting insight into the RAF deployment in the Greek campaign. One of the Blenheim's were recovered from Lake Mikro Prespa in 1993, and the remains are displayed at the Hellenic Air Force Museum.