I was Hitler's chauffeur

It is a book title that catches the eye, and that, coupled with the cover picture Hitler and Mussolini, was enough for me to take it off the shelves at my local library. These are the memoirs of Erich Kempka, who was Hitler's chauffeur from 1932 until Hitler died in 1945. 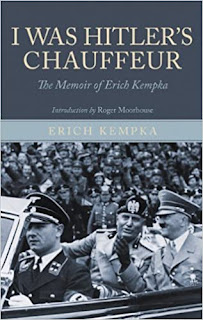 Kempka must have been the highest-ranking chauffeur of all time. He was an Obersturmbannfuhrer in the SS (Lieutenant-Colonel), although his duties included command of the motor pool and helped design vehicles for Hitler's use and his presents to other leaders. He personally drove Hitler throughout this period, which put him in a position to comment on the man himself and those in the inner circle.

Even though it was written after the war, it is clear that Kempka admired Hitler, unlike Bormann, who he clearly disliked. The problem with the memoirs is that you get very little information about the people and places and the conversations he must have overheard. In fact, most of his memoirs focus on the final days in the bunker. The odd snippet included his design of a bulletproof car for King Boris of Bulgaria shortly before his death. Interestingly, Hitler rejected such a car until wartime because he didn't think anyone in Germany would want to assassinate him! He also argues that Keitel and Jodl had the decisive influence on war policy.

For the conspiracy theorists who believe Hitler didn't commit suicide, this was the man who provided the petrol that burned Hitler's corpse. In addition, he personally carried Eva Braun's body to the grave.

This is one of a series of books by Hitler's household staff. While they give some insight into the realities of life in the Nazi inner circle, I am not convinced they have much historical interest. Hitler may have been 'a good boss', even pleasant to animals, but that really doesn't help us understand the murderous decisions he made.

It is thankfully a slim volume, and you can ignore the appendix written as context by an obviously ardent Nazi. Overall, really not worth the effort.