This is Scott Rusch's book on the strategy, tactics and campaigns of the Spartan state from 550 to 362BC. This was the period when Sparta was the dominant military power in Greece. Its armies won ten major battles, defended Greece against the Persians, and defeated Athens in the Peloponnesian War (431-404BC). Even when they lost their naval supremacy, they remained the strongest state on land. 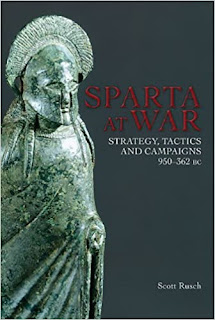 The story of Sparta is all the more remarkable when you consider how small the Spartan state was. When I visited the site, the one thing that struck me was the modest size of the public buildings and the city itself. The absence of fortifications is also striking compared to other sites in the Peloponnese; Spartan shields were their fortifications. 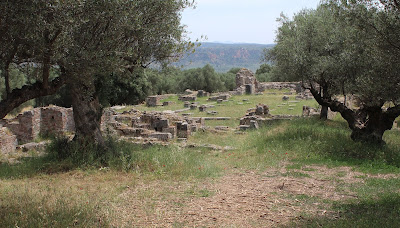 This is, without doubt, a meticulously researched study of the Spartan campaigns. Perhaps less of a study of strategy and tactics. Although one aspect of their strategy not always picked up is the alliance system. Spartans may have been the cutting edge of alliances, but they often engaged in wars with very few Spartiates being present. Like other states, they made extensive use of mercenaries, and allies made up a significant proportion of the troops in major battles. In addition, Spartan officers were often sent to direct allied forces, called Xenagoi (Leaders of foreigners).

They also took with them to war large numbers of auxiliaries in the form of Perioecs. These small scattered communities were concentrated on the borders and fought with the Spartans as heavy infantry and cavalry. And the better-known Helots who acted as servants and could fight as light infantry. It has been argued that they took large numbers of Helots with them to mitigate the risk of revolt while they were away. However, revolts were relatively rare, and ancient armies needed many men to keep an army supplied.

The Spartan hoplite was still a citizen militia, and while it is famed for the training from a young age, other Greek cities had similar systems. The difference was in degree, both physical and mental. They were noted for their careful observance of omens, festivals and prophecies, often to the frustration of allies waiting for them! They also had a stricter camp life and routine than other Greek states.

Sparta's decline was caused by various factors, not least being stretched too far for its oligarchic system and the rise of military skill in other parts of Greece. Thebes developed a combined arms force and the leadership ability to tackle the Spartan army in a pitched battle at Leuctra in 371BC. This battle ended the era of Spartan dominance in Greece as the alliance system collapsed, followed by a social revolution at home. The rise of Macedon ended any hope of a revival. None the less they were the best of the Greeks for two centuries of hoplite battles.

This is a detailed study of the Spartan campaigns supported by good maps. I would have liked to see a little more analysis of strategy and tactics, but it is there in and amongst the narrative.

Here are a couple of 28mm Spartan hoplite units from my collection. 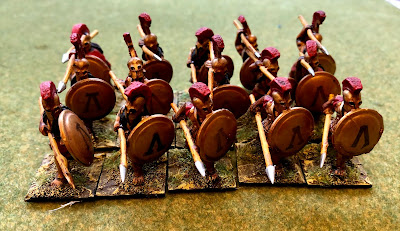 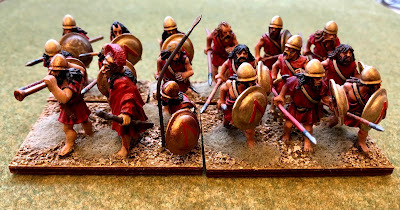