The Red Prince: John of Gaunt

John of Gaunt tends to be forgotten amongst the pantheon of great English leaders of the Hundred Years War period. The Black Prince, Edward III and Henry V probably spring to mind first. However, Helen Carr's new biography of the Duke of Lancaster reminds us that he was a key player, and his legacy was arguably even greater. 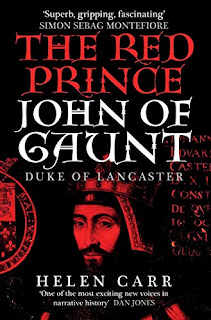 His name is a take on his birthplace, Ghent in Flanders. His mother was Queen Phillipa of Hainault, and his father was Edward III, who arrived there two months after his great naval victory at Sluys. Flanders was crucial to the English economy of the period as they took most of its wool exports. As Carr puts it, his early life was lived "in a polarised world of war and chivalry, poverty and plague."

The King had great plans for him, even a scheme to place him on the throne of Scotland. Gaunt developed strong diplomatic ties with Scotland and became the go-to peacemaker. Later in his life, he even sheltered there when he thought his life might be at risk. He learned the skills of being a prince and huge landowner from his older brother, The Black Prince.

While overshadowed militarily by his older brother, John took part in many military campaigns during the Hundred Years War. He commanded in Calais and Aquitaine when the Black Prince fell ill and subsequently died. He most famously took part in the Castilian Civil War after Pedro I was deposed by his half-brother Enrique Trastámara. He played a key role in the victory at the Battle of Najéra, supporting Pedro. The skirmishing tactics of the Spanish came a cropper to the longbow and dismounted knights combination that the French were learning to avoid in open battle. Castile would become something of an obsession with John of Gaunt.

Pedro was later murdered, and after the death of his first wife, Gaunt married Pedro's daughter and proclaimed himself King of Castile and Leon. Persuading the King and Parliament to finance an expedition to turn the title into reality was more challenging. Much later, he managed to finance an invasion and landed with an English army allied with the Portuguese. However, the Spanish had learned from their French advisors and deployed a scored earth policy, which added to the summer heat, resulted in disease and rebellion amongst his army. He was forced to cut his losses and agree to drop his claim in return for the marriage of his daughter into the Castillian royal family.

His later years were dominated by the erratic rule of Richard II, which included the Peasant's Revolt. Gaunt was unpopular in London, and his Savoy Palace was burned to the ground in this period. Or, more accurately, the rebels thought they were rolling wine barrels that turned out to be gunpowder, consuming all in the subsequent explosion.

Gaunt's eldest son was Henry Bolingbroke. His desire for adventure led him to a campaign with the Teutonic Knights in Prussia. The somewhat thin justification for longbows in the Teutonic Knights army list for some wargame rules. After Gaunt's death, Richard II unwisely disinherited and exiled him. He returned in 1399, recruited an army and deposed Richard II, becoming Henry IV, the start of the Lancastrian royal dynasty. Gaunt's daughter Catherine became Queen Consort and then Regent of Castile. Her great-granddaughter was Catherine of Aragon, the future wife of Henry VIII.  This brought the dynasty full circle.

This is a good story, well told and fills in many gaps in my understanding of the period. Highly recommended.

For the tabletop, the most interesting clash is the Battle of Najéra. I have a decent collection of Spanish armies, mostly for the earlier period; after display games, I organised for GDWS in 2012 and 2013.

I tried a new quicker format for playing To the Strongest! Using the 15mm mat, I halved the normal 28mm unit size. It works very well and gets the army on the table quicker.

It looked as if the ruling Castilians were going to walk the game contrary to the historical battle. However, the English wing of Pedro's army led something of a recovery, and it was only a narrow victory for the Castilians in the end. 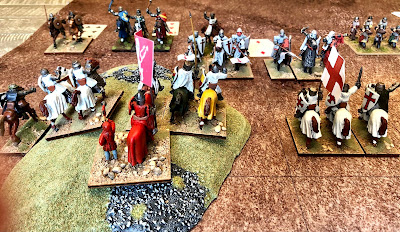 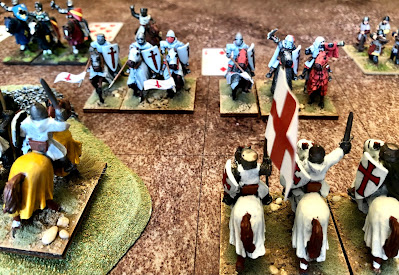 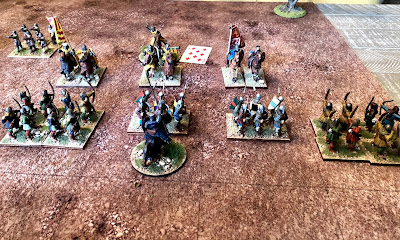