This Osprey Men at Arms covers the Yugoslav armies of WW2, written by Nigel Thomas and Dušan Babac. This is a must-buy for me as one of the very few wargamers crazy enough to build a 28mm Yugoslav Army. An army that lasted eleven days is rarely appealing to the wargamer! 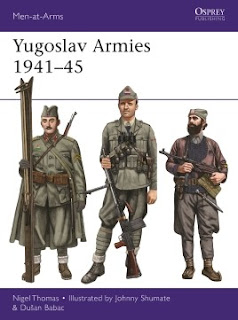 The first chapter covered the army in 1940. A short description of the organisation and deployment, followed by sections on the uniforms of each service. They have gone for a slightly greener khaki than I did, but in practice, there would have been many different shades. There is a potted history of the campaign, but this book is very much focused on uniforms.
The next chapter covers Royal Yugoslav forces in the Middle East. This wasn't a happy story; riven with factionalism, they were relegated to secondary roles. The serious fighting was done by the various resistance armies. Firstly the Chetniks who failed to seriously engage the Germans and ended the war fighting with the Axis against the Partisans. The authors have not quite gone the whole revisionist line, popular in some quarters these days, but they are more sympathetic than many.
The final chapter covers the People's Liberation Army, the most successful guerilla army of WW2. There is a potted history of the campaign and the organisation that developed from small units into a conventional army. Gaj Trivkovic's book 'Sea of Blood' is the final word on the partisans, but this is a decent overview. There was little uniformity in either the Chetniks or the Partisans, but the colour plates are a good starting point.
Osprey has done partisan warfare (MAA 142) and a Warrior (73) book on the partisans, so this is a bit of duplication. If you have these, then the new material is on the Royal Yugoslav Army, which has been poorly covered. As usual, you get plenty of illustrations and fine colour plates by Johnny Shumate.
Posted by Balkandave at 18:05