This is Owen Matthews's book about Nikolai Rezanov and the dream of a Russian America. It was a bit off my usual radar, but I spotted it in my local library. 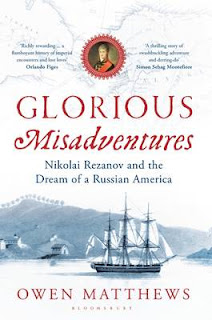 I had a vague recollection that the Russians sold Alaska to the USA. I didn't realise that by 1812 the border of the Tsar's dominions was just an hour's drive north of San Francisco. They also had a colony in Hawaii.

The base for this expansion was Siberia. From there, Cossack explorers visited the Aleutian islands in forty-foot boats, chasing very profitable pelts and furs. These expeditions fired the imagination of the Russian leadership. This also came to the attention of the Spanish, who had lightly colonised the coast of California, encouraging them to step up security. This included founding a new mission at San Francisco and sending a naval expedition from their naval base at San Blas in Mexico. Captain James Cook, the English explorer, had also visited Hawaii and further north, exciting some interest in London.

The Russian entrepreneur Grigory Shelikhov came up with the idea of creating a crown monopoly along the lines of Britain's Hudson's Bay Company. The Tsar appointed Nikolai Rezanov as his emissary. To give some idea of the distances involved, it took Rezanov seven months to reach the ramshackle Russian port of Okhotsk on the Siberian coast. His vision was much larger, more akin to the East India Company.

The rest of the book covers Rezanov's travels, including Japan, still in its isolationist period. His dreams of trading with Japan were dashed by this policy, not to mention his lack of diplomatic skills. Later the Company's ships attacked the Japanese coast, a decision to effectively declare war that Rezanov took himself. They did strengthen the Russian outposts in Alaska, albeit at great cost to the indigenous tribes. Like other colonial empires, they brought diseases to which the local communities had few immunities. There were also small and some larger-scale conflicts. The Russian Orthodox Church provided priests, which, together with alcoholism, are the two reminders of Russian rule in Alaska today. A staggering three million rubles' of furs were sent back to Russia. The Company's Russian fleet was limited, and colonies often relied on American ships for supplies. Rezanov reported that the Company's shipping was in the hands of alcoholic officers, some manic depressive and others murderous.

The furthest south Rezanov got was San Francisco. Despite the Spanish Government's no trading policy, he was well received by the Spanish authorities. War in Europe would impact this policy, but the news took months to get to these far-flung outposts. Even Mexico was some distance away, and only two or three Spanish ships visited each year. Rezanov even got engaged to the local commander's daughter, Conchita. However, his travels eventually took their toll on Rezanov's health, and he died in March 1807 on his return to St Petersburg.

North of San Francisco, Fort Ross remained the most southerly outpost of Russian America until 1842. Somewhat renovated, it is a state museum today. Timing is all; as the Spanish Empire crumbled after the Napoleonic Wars, a larger Russian presence could have exploited this. Just after they sold the colony, the Californian gold rush began. Hawaii was abandoned even earlier after the Russians became embroiled in a local civil war. The Company was wound down after many of its officials were involved in the failed plot to depose the Tsar in 1825. From Rezanov's death onwards, Russia never missed an opportunity to miss an opportunity in the New World. They offered Alaska to Britain in 1859, but Palmerston decided he had enough uncharted wilderness to deal with in Canada, so it was bought by the USA in 1867.

For the wargamer, there are a few colonial skirmishes with the Russians represented by Cossack types. Eureka Miniatures do one of the Alaskan tribes, the Tlingits, who regularly fought the Russians in 15mm. Varang Miniatures also do them in 28mm, along with Aleuts and Russian trappers. The March edition of Wargames Illustrated has a good article on these conflicts. The 'what-ifs' are more promising. If Russia had properly exploited their colonial outposts, there could have had a conflict with the Spanish. And later, a Russian California would have had an intriguing border with the USA. The prospects are endless there!