Budapest: The Stalingrad of the Waffen-SS

This is Richard Landwehr's study of the siege of Budapest with a focus on what he calls 'the backbone of the defensive effort', IX SS Corps and the 'Florian Geyer' and 'Maria Theresia' cavalry divisions. There are more detailed and more objective studies of the siege. In particular, Battle for Budapest by Krisztian Ungvary, as well as a good Bolt Action supplement for wargames. I collected a Hungarian army based on the supplement. 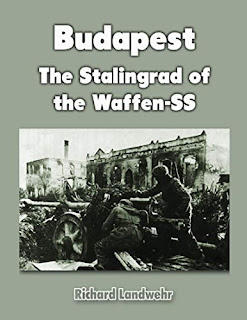 I started to get suspicious when there was no introductory chapter on the divisions and how they got there. The soldiers are described as 'sharing one thing in common: an inner fortitude of inextinguishable dimensions'. No mention that the 'Florian Geyer' Division killed an estimated 3,000 Russians in a 'pacification' campaign, the great majority of whom were unarmed!

While there is a decent collection of photographs and descriptions of the action, the narrative continued to emphasise that these SS troops were 'saving countless lives that otherwise would have been engulfed in the red tide.'

At this stage, I thought I had better check out the publisher and the author. The publisher has had a mixed background, but the author is noted for his extreme admiration of the Waffen SS. As Wikipedia sums him up, 'Richard Landwehr is the author of numerous books about the Waffen-SS, its non-German volunteers, in particular, providing revisionist and apologetic accounts of these men and their battles. He has been producing the magazine Siegrunen on the same topic for over 30 years. Landwehr has written for the Journal for Historical Review (JHR), which is published by the Institute for Historical Review, an American Holocaust denial organization.'

So, one to avoid.

P.S. I see Helion has the edited Soviet General Staff study, The Budapest Operation, with 20% off.