This is a new look at NATO and Warsaw Pact tanks during the height of the Cold War, written by the premier tankie, Steven Zaloga. I started being a bit sceptical about this approach, as the tanks involved have been extensively covered in other Osprey Vanguard books. However, this book highlights the development of tanks during the period and how they compared, and I certainly learned something new from it. 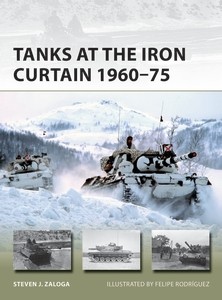 At the start of the period, both sides were debating the future armament of their tanks. Should they be armed with anti-tank missiles, or should they attempt to outgun their opponents? For the Soviets, with the 100mm T55 as the standard MBT, the army wanted a bigger gun when they evaluated the new American M60. The Americans experimented with the missile option in the M60 and in their new light tank, the Sheridan. The Russians developed the Obiekt 150, which was championed by Khrushchev, who exclaimed, 'The tank has no future against this weapon!' In the end, both sides decided that the versatility of gun tanks was best, and ATGMs could be fired from lighter, faster and cheaper AFVs. Ammunition storage was another factor against the missile tank.

I was interested in the tank production data. The Soviets (excluding the Warsaw Pact) continued to produce the T55 long after the T62 was in full production and even after the T64 and T72. For example, in 1973, they still churned out 385 T55s as well as 1,620 T62s, 500 T64s and the first 30 T72s. Most exports came from the Warsaw Pact producers, so that is not the only explanation.

In design terms, Soviet tanks were lighter but similarly armoured to NATO tanks, at the cost of ammunition storage. The cost was always a factor with all armies of the period. A T-62 tank took 5,855 man-hours to build, but the T-64 required 22,564 man-hours, four times as much. The price for a T-62 in 1973 was 62,000 rubles compared to 143,000 for the T-64A, more than double the price. The rationale for accepting the T-72 into production simultaneously with the T-64 (and the T55 and T62) was that it was less costly since it used less elaborate fire controls. As a result, it could serve as a wartime “mobilization tank” that could be quickly built in larger numbers. Also, it could be manufactured by the other Warsaw Pact countries.

On the NATO side, attempts to agree on a standard design failed for all the usual political and economic reasons. Hence the array of new tanks, including the Leopard, Chieftain, AMX30 as well as the M60 in many variants. The Leopard 1 became the standard NATO tank of its generation, with about half of total production going to eight other NATO armies. Exports also allowed the cost to be kept down, and in the British case, more Chieftains were exported than served in the UK armed forces. The M48 was also updated in several NATO armies. The British 105mm gun was used in several designs. During the Hungarian Revolt of 1956, insurgents in Budapest drove a captured Soviet T-54A tank to the British embassy, where it was inspected by the military attaché’s office. The thickness of the frontal armour proved very worrying and led to the development of the 105mm gun.

Thankfully, as the Cold War never got hot in Western Europe, it is difficult to evaluate the effectiveness of different designs. Lessons from outside Europe were limited. The Americans only needed the older M48s in Vietnam because there was no armoured opposition. Similarly, the Soviet invasion of Czechslovakia was unopposed by armour. The Indo-Pakistan Wars were fought with tanks that were mostly obsolete in western armies. And the Arab-Israeli conflict outcomes were determined by the superior training and tactics of the Israel Defense Forces (IDF) rather than technological issues. The missile threat was evaluated. However, the early studies exaggerated the effect of the Egyptian use of Soviet ATGMs. Of 7,000 missiles fired, about 250 tanks were damaged or destroyed. This suggested a success ratio of 1:28 or a 3.5 per cent probability of hit.

The book concludes with a technical analysis of the different elements of tank design, including firepower, fire control, armour, and mobility. This chapter concludes with an interesting classified Soviet comparative analysis. They rated most NATO tanks as better than the main Soviet designs, although the high rating of the T10 is a bit of a mystery.

As usual with this series, you get plenty and data, photos and some very nice colour plates. The tankies might want more, but for the wargamer, in particular, this is a useful addition to the bookshelves.