This is Michael Feather's short study of the Royal Navy frigate HMS Amphion, which served during the Napoleonic wars. He has looked at the frigate's life from construction to decommissioning. My interest is that this was the ship William Hoste took into the Adriatic for his earlier voyages before he was given command of the larger frigate HMS Bacchante. 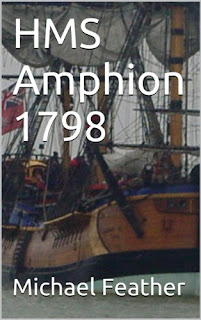 The author's interest was sparked when he passed the abandoned Betts yard at Mistley in Norfolk, where the 32-gun HMS Amphion was built between 1796-1798 at the cost of £13,958. One of five frigates constructed to the same design from English oak. She served for 22 years, which was quite long for a frigate. She was fitted out at the Chatham shipyard. Her guns were 26 18lbrs on the upper deck, 6 24lbr carronades on the quarter deck and fo'c'sle, and 6 6lbr long guns on the fo'c'sle deck and fo’c’sle (this gave a specification of 32 guns as the small 6lbrs were not counted).

William Hoste was a protege of Nelson's and was given command of Amphion on 13 October 1805 at the age of 24. He was on a mission to Algiers, so he missed Trafalgar. After some limited action with Sir Sydney Smith, he was sent on ‘the best cruise in his command’ to the Adriatic, joining the Unité in harassing enemy shipping and shore stations. In 1809, Hoste became the senior captain and, for a time, the only frigate captain in the Adriatic, which meant that he did not have to share so much of the prize money with others. A constant concern as he was financing his spendthrift father.

Hoste was commanding Amphion at the Battle of Lissa in 1811, the last major naval action of the war. The Amphion returned to England and lay shattered at Greenwich for a while, needing more than the typical hasty repairs. As a point of honour, she was repaired although she was already obsolete, not big enough. The Americans were causing havoc with their large, heavy frigates, and the French were building 44 gun frigates. Hoste returned to the Adriatic campaign in Bacchante. When Amphion was repaired, she performed anti-smuggling tours in home waters and a show the flag tour of South America before being sunk as a breakwater in 1820.

This is an interesting study using the original records in the archives. I know from my own experience that this is pretty challenging, not just because of the age of the documents but also trying to interpret the handwriting.

There are plenty of scenarios here for games of Black Seas. I am currently painting Russian ships, but the Royal Navy ships are ready to sail once again. 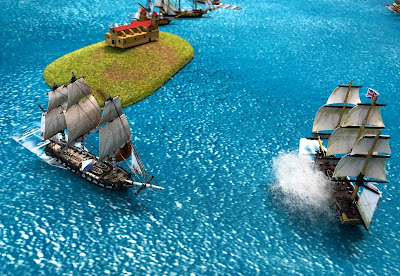