This book covers the memoirs of Lieutenant John Hildebrand 35th Foot in the Mediterranean and Waterloo Campaigns, edited by Gareth Glover. The 1st Battalion of the 35th Foot was the main British regiment serving in the Adriatic during the Napoleonic Wars. John Hildebrand was present during most of the island and coastal hopping campaigns between 1811 and 1814. Glover has done an excellent job editing these memoirs, which were written sometime after the action. He corrects obvious errors and gives some important context. 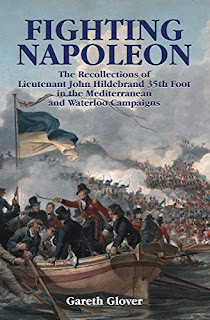 He was born in Berwick-upon-Tweed, a long way from the regiment's recruitment area in Sussex. Although his father served in the Sussex Fencibles when based near Glasgow, which may explain some influence in his getting the Ensign position without purchase. The 35th Foot was often divided into detachments for individual actions, which meant that even junior officers had independent commands. Young army officers serving in the Adriatic, being granted more freedom and often working without close supervision, caught the same bug as the 'gung-ho' naval officers. The latter were always looking for an adventure, whether at sea or on land.

The battalion first arrived in the Adriatic in September 1809 as part of General Oswald's expedition to capture the Ionian Islands from the French, together with foreign regiments including the Royal Corsican Rangers and the Greek Light Infantry. Hildebrand was with another force in Sicily. They captured Zante, Cephalonia and Santa Maura, and he joined the garrison on Zante in May 1811. He wasn't much impressed with the Greek Light Infantry, saying, "1st Battalion of the Greek Light Infantry Corps was raised, a fine-looking body of men but, as it turned out, utterly useless as soldiers and worse; so troublesome and unruly in discipline that, however hard the duties of the different garrisons of Zante, Santa Maura, Cephalonia, &c, no commanding officer could ever be persuaded to have that corps, if he could possibly avoid it."

He was part of a detachment that occupied Lissa (Vis) in May 1812. From there, under the command of Colonel Robertson, they attacked other French-held islands, including Lagosta (Lestovo) and Curzola (Korcula). Hildebrand was given command of the garrison at Lagosta, unusual for such a junior officer of the period. On his own initiative, he joined the siege of Ragusa (Dubrovnik) during 1813-14, being prosecuted by local irregular forces. The siege is covered in detail before the Austrians arrived and took the French surrender. He was given retrospective approval by Robertson, which was just as well given the sensitive politics of the siege.

He was offered a promotion in a new regiment being raised in Italy, but Napoleon's defeat in 1814 cut short that prospect, and he ended up back in the garrison at Corfu. The main enemy there appears to have been the fleas! He was sent home due to ill health but rejoined the regiment before Waterloo. The regiment was on the periphery of that battle.

Napoleonic memoirs can be a bit turgid and often full of detail the reader can do without. However, this is excellent, not least because of Glover's editing. An excellent primary source for my Adriatic project. The actions described are perfect for small battle rules like Sharp Practice or Rebels and Patriots.