I have been indulging in some background reading for my Adriatic project. The first book was Jim Potts' The Ionian Islands and Epirus. This is described as a cultural history, and while there is plenty of that, there is also plenty of general history to help me better understand the islands and their strategic position in the Napoleonic wars. I spent a week touring Epirus some years ago and visited the coastal ports traditionally linked to the islands, but I haven't been on the islands themselves. 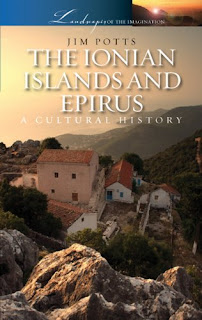 The Venetians held onto most of the Ionian islands, and the mainland ports of Parga and Preveza, during the long Ottoman occupation of Greece. The French took Corfu and the other Ionian Islands in 1797 to be temporarily driven out in 1799, but they returned in 1807. The British then invaded the southern Ionian Islands (Zakynthos, Kefalonia, Ithaca and Kythira) in 1809 and held onto them until handing them over to Greece in 1864.

Napoleon wrote, "I think that henceforth the chief maxim of the French Republic should be never to give up Corfu, Zante, etc." He cited economic reasons but also highlighted the strategic value, "With Malta and Corfu we should soon be masters of the Mediterranean.... Corfu and Zante make us masters of the Adriatic, and these islands are of the greatest importance to us." He also saw the islands as an essential staging post to take advantage of any break-up of the Ottoman Empire.

British tourists came in large numbers to Corfu when it became a major tourist destination. And although it is probably not as popular these days, many thousands still descend on the islands. You can even still play cricket. British tourists have not always behaved, with the combination of sun and cheap booze being an early attraction. As the author points out, this is not new. Lt. Col. Napier, writing in 1825 about Kefalonia, blamed drunkenness as one of the main causes of disease and death amongst British soldiers, as well as exposure to the sun, bare-headed.

The Ottoman governor of Epirus, Ali Pasha, regularly features in the book. His is a fascinating story, rich with anecdotes to liven any tale. Quentin and Eugenia Russell are the latest to write a biography of the old rogue and very good it is. As the Reverend Hughes put it, "As long as he lives he will exert all his energies to gain a footing in the Ionian Islands, and upon his death-bed he will bequeath these sentiments to a successor." The islanders, particularly the Pargians, wisely did their best to keep him out. But, sadly, it was the British who sold them out in the end, and many ended up on Corfu.

I was in the Scottish National Book Town of Wigton last week. It hasn't reached the levels of Hay on Wye, but it has a few very good second-hand book shops. I picked up two books related to my project. Celia Irving's The Adriatic Islands and Corfu is an old-style travelogue of the sort you don't see as often these days. When she wrote it in 1971, most readers would have bought it for the vicarious thrill, while today, they are all within reasonable travel range. While the travel details are pretty outdated, the history and anecdotes are still relevant. I have quite a few of these covering Balkan travels, and they are still worth a read.

The other book is Colonel Leake in the Mani, edited by Martin Jones. Leake was sent by William Pitt to survey the Peloponnese and northern Greece. He liaised with Ali Pasha and brought him artillery and other military stores. These included Congreave Rockets. I have yet to find a first-hand description of their use in action, but it must have been a sight to behold!

This is all interesting background reading that I suspect probably won't get many readers to dash out and buy them. However, if you are planning a holiday to any of the Ionian islands, then Jim Potts' book is worth a read on the plane and can be picked up cheaply on the Kindle.