I popped into the annual exhibition of my local model railway club last weekend. I am always impressed by the standard of modelling and grateful that wargaming doesn't require me to understand electronics! I picked up a book from one of the stalls on the Cairnryan Military Railway by Bill Gill. 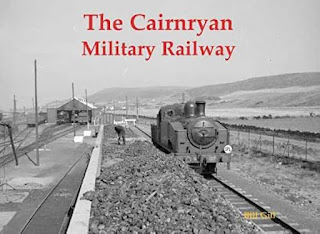 Cairnryan Port is just down the coast from me, and I had no idea it was built as a military port in WW2. Today, it is the terminal for the disgraced company P&O Ferries, so I drive past but don't use it.

After the fall of France, many ports came within the Luftwaffe bomber range, so another deepwater port was needed in case the Clyde in Glasgow or the Mersey in Liverpool became unusable. Various sites were considered before settling on Loch Ryan. What became known as Number 2 Military Port was built on its northern shore at Cairnryan between 1941 and 1943. There were three piers and a total of 1.5 miles of quayside, with a railway network which connected to the main line at Stranraer. It was never extensively used as the Clyde and Liverpool stayed open during the war. However, it was used to move men and materials to Northern Ireland, and American troop ships docked there.

It was built by military labour from the Royal Engineers and the Pioneer Corps. The scale of the operation was huge, with five groups of sidings to accommodate two thousand wagons. This required a large engine shed and coaling stage, not to mention several army camps to accommodate the men who built and operated it. The site was a bit short of amenities. When the 600-strong crew of HMS Phoebe came ashore looking for the local pub, they were told there wasn't one. And as an afterthought, a crane operator said the last train for Stranraer had just left!

This port was used to dump unused ammunition in the Beaufort Dyke after the war. An issue that came up recently when Boris Johnson came up with the notion that a tunnel should be built between Scotland and Northern Ireland. This involved hundreds of ammunition wagons, including gas shells and particularly nasty German nerve gas. Shells were supposed to be defused, but eight Royal Engineers were killed when a case was mishandled. One consignment of gas shells broke loose on a stormy night when passing through Girvan, a small town north of the port. This might have been the rail disaster of the century had a sharp-eyed signaller not switched the points just in time.

There isn't much to see today, and what there is overgrown and sometimes dangerous. However, the author guides the visitor to what remains and the site features on the Solway Military Trail. One of the 'Austerity' Class locomotives that worked the line has been refurbished and operates at the Bressingham Steam Museum in Norfolk.

I suspect this book won't be on many people's to-buy list. However, it has local interest and further afield if you are interested in military railways.