This is a new title in the Osprey Essential Histories series by Michael Lynch. It covers a less well-known conflict and is the correct length for those who just want an introduction to a new subject. 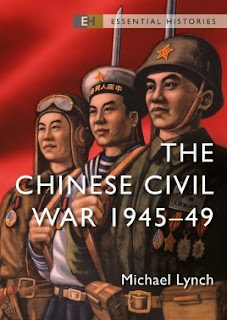 The Chinese Civil War of 1946–49, one of the bloodiest conflicts of the 20th century, took the lives of over five million soldiers and civilians. The conflict was fought between the Guomindang (GMD or Nationalists) and the Chinese Communist Party (CCP or Reds). It had been going on for two decades when both parties united in destroying the warlords. The Nationalist leader Chiang Kai-shek hated Communism and turned against his former ally, trying to destroy it. That didn't end well!

A complicating factor was the presence in China of occupying Japanese forces. Beginning in 1931 with its invasion of Manchuria, Japan launched a full-scale occupation of China in 1937. The communists and nationalists intermittently joined forces to fight them, but like many WW2 resistance stories, they both had an eye on the post-war settlement. The Soviets in Manchuria should have been natural allies for the communists. However, as late as 1949, Stalin was urging Mao to accept a compromise peace with the Nationalists. He preferred a split China, rather than an international rival. The Americans were not as hostile to Mao Zedong and the communists as you might expect. They rightly saw them as an effective fighting force against the Japanese, at a time when Chaing did not always commit his forces to the common fight.

The Nationalists, were intially successful when they attempted to drive the Communists from their northern bases, but were unable to achieve a major victory. By 1949 their grip on northern, central and southern China had been broken in a series of victorious People’s Liberation Army (PLA) campaigns. In October 1949, in Beijing (Peking), Mao Zedong claimed that a new nation had been created, the People’s Republic of China (PRC). Chiang, knowing that the position was irrecoverable abandoned the mainland. and fled with his forces to the island of Taiwan.

In this book you get an analyis of both armies, although this is a history rather than an Osprey Men at Arms series army booklet. There are plenty of illustrations, and I particulary like the wartime propaganda posters. Leland Ness and Bin Shih's study of Chinese ground forces during the Second Sino-Japanese War 1937-45, offers more detail if you want it.

Then a chapter on strategy and tactics. This is a complex war, fought over vast distances with large disparate forces. So, the excellent maps are essential. This was a brutal conflict, with attrocities on both sides, as the photos show all too graphically. The campaigns also highlight the sub-commanders on both sides, who played a key role in the conflict, but are almost unknown outside China. Mao was quick to promote succesful commanders, while the Nationalists often squandered their opportunities. Mao ordered that POWs be treated as potential recruits by offering them the chance of survival if they changed sides. In contrast, the Nationalists exercised no such calculated mercy.

The final chapters looks at the main protaganists and world around the conflict. Mao and Chiang were ruthless, but no leader in 20th-century China could have afforded to be anything else. The lack of any mechanism in Chinese politics for the peaceable transference of power meant that violent struggle was the norm.

In a sense the Chinese Civil War has not ended because no formal peace treaty or agreement has ever been made. Even today China retains its claim over Tiawan and regularly conducts military exercises around the coast. This book helps explain current events and shines a light on a little-known war.