Books on the Ottomans during the Napoleonic wars are a bit like buses. First, nothing for ages, then two come along at once! Well, not quite at once, but Chris Flaherty's book on the uniforms, tactics and organisation of the Napoleonic Ottoman Army came out in 2020. This new book by Bruno Mugnai complements Chris's book, as it is stronger on the written sources, while Chris concentrates more on the uniforms. 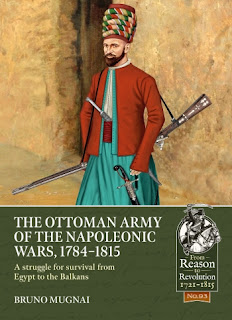 There are four main parts to the book.

The first section focuses on the Ottoman Empire, the 'Sick Man of Europe' as it was known, although that phrase tended to be more widespread later in the century. There is an interesting discussion about the decentralisation of the empire and the power of the ayans (local notables), like Pazvantoglu Osman and Ali Pasha. Mugnai argues that this period demonstrates the interdependence between local power-holders and the Porte. He also points to the large distances from the centre to the borders, which made centralised control on the western model challenging. Losses of between 25% or even 50% were not uncommon during the campaign. Finally, there is a complete discussion on attempts at reform and the power struggles that negated almost every effort.

The following section discusses the armies of the Sultan. This covers both the regular units of the standing army, most famously the janissaries and the myriad local troops. He also discusses the introduction of western technology and tactics, primarily with French assistance. This includes the New Order Army and how it had to be developed in secret. Finally, the chapter on auxiliary troops is excellent, as this is probably the least well-covered part of the army.

The third section covers the wars the Ottomans fought during this period. These were extensive in both Europe and the Middle East. It always annoys me when wargame army lists ignore the Ottomans. When I pointed out this omission to one author, he replied that the Ottomans didn't fight during the Napoleonic wars! He was a bit shocked when I sent him a long list! They are all covered here, including some that I had missed. The author uses this section to discuss how Ottoman tactics developed and adapted to different conflicts. In particular, how Ottoman cavalry tactics were no longer able to withstand confrontation with the west and the failure to coordinate cavalry, infantry and artillery.

Finally, a section on Ottoman dress, equipment and ensigns. Chris Flaherty's book covers this in more detail, but it rounds off the book.

As you would expect from a book in this series by Helion, it is lavishly illustrated, including a batch of colour plates. I fear my 28mm janissaries look too parade ground based on these plates, although my 15mm figures are better balanced. The plates and discussion about the Nizam-i Cedid uniforms make me think it's time for a rethink.

Overall, this is excellent. It isn't a light or a quick read, but one I will return to frequently.

I am currently painting Albanian and Montenegrin figures for this period. Here are the first Albanians who served in the Ionian Islands with both the French and the Russians. A lot more to do, but these at least look as if they have been on campaign. 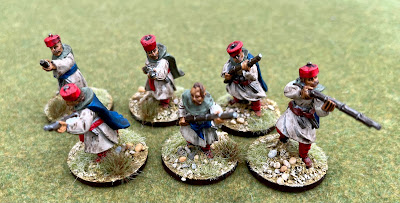