The Murder of Admiral Darlan

I found this book in a second-hand bookshop in Hay-on-Wye, which intrigued me because I knew very little about the French side of Operation Torch - the Allied landings in French North Africa in November 1942. While the book's title refers to one aspect of that story, the book covers much more. The author, Peter Tompkins, served with the Allied Psychological Warfare Branch in North Africa and witnessed many of the events he describes. 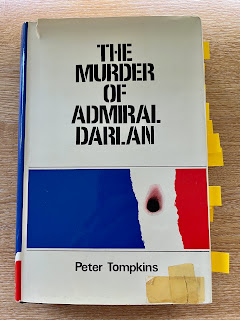 The background to the story was the efforts to ensure that the Allied landings commanded by Eisenhower did not face military resistance from the Vichy French forces. These forces were significant if poorly equipped. However, fighting would undermine the liberation message and delay the advance into Tunisia, cutting off Rommel's retreat from the Western Desert after El Alamein.

So, the Allies looked to find French military leaders who would play ball. Weygand was an early option, although he was never very keen. The Germans distrusted him and even sent General Huntziger to North Africa to collect a dossier on him. Admiral Darlan had his plane sabotaged on the return trip! The Americans, specifically their diplomat on site, Robert Murphy, worked hard to build a network of sympathetic French officials. They settled on Giraud, who had escaped from a German prison camp. But, you may ask, why not de Gaulle? After the shelling of Mers-el-Kebir and Dakar, the French African Army disliked the British and viewed de Gaulle as a British puppet.

The problem for Murphy and his team is that they could not reveal the date or details of the landings for security reasons. The landings were delayed, so even the last-minute efforts were less than adequate. The conspirators did manage a partial coup in Algiers, but there was significant fighting elsewhere, particularly in Morocco. French troops received contradictory orders, and commanders kept referring decisions back to Petain in Vichy.

Admiral Darlan, as commander of the French Navy, had no formal role in North Africa, but he had arrived there just before the landings. He ended up heading the French administration while Giraud commanded the army, being equipped for fighting in Tunisia. The rest of the book contains the plots and counter-plots between the various French factions. These included the claimant to the French throne, pushed forward by the royalist faction. Eisenhower could have done without this as the Tunisian campaign faltered.

Admiral Darlan was assassinated by a young army officer, Fernand Bonnier, who clearly had help, and assumed that the new administration would free him. However, he was quickly tried and executed. Even his deathbed confession was hushed up. Giraud reluctantly took up the political role and was reconciled with de Gaulle after the Casablanca conference.

An interesting side story about that big Allied conference was that Spanish agents radioed Berlin with the venue, suggesting the Luftwaffe bombed it. However, 'Casablanca' was literally translated into 'White House', a little out of the range for German bombers. On such minor details are wars won and lost!

The final chapter outlines an astonishing conspiracy going back to the 1920s and 30s. A key player in the story was Lemaigre-Dubreuil, who was part of Murphy's early network. He was part of an extreme right-wing network in France that was behind the unsuccessful Cagoule coup in 1937. They also connived with German industrialists to undermine the French military effort in 1940 as part of a plan to create a fascist bloc across Europe. So, if you thought de Gaulle was bad, it could have been worse!

My edition was published in 1965, so you will need to badger the library or get a second-hand copy. Nevertheless, it is an interesting read.