Well you can't have a Jacobite uprising without some Highlanders.

These are Warlord figures from their boxed set. They are a bit stereotypical I suppose; bare arse, drinking etc. But for this skirmish project they provide a bit of everything.

I also used one of the flags they provide because the Stewart of Appin Regiment was at Sheriffmuir. Stuart Reid's book provides an appendix listing what we know of the Jacobite regiments.

He says they were led by Robert Stewart of Appin and appeared to have 260 men on the roll, but only 180 were drawing rations by 22 November. They are described as 'but ill armd' - I suppose they mean the beer tankards that my guys brandish! 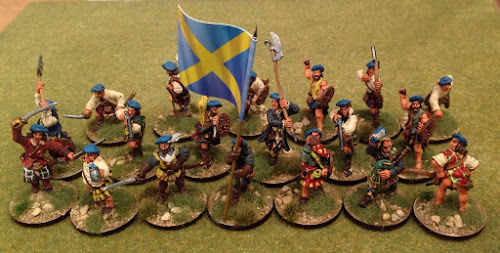 Next up either the lowland foot or some horse.