The Serbian Army in the Wars for Independence

I have just finished Dusan Babac's 'The Serbian Army in the Wars for Independence against Turkey 1876-1878', published by Helion Books. 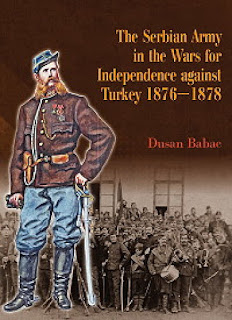 In 1875, a number of revolts against Ottoman rule broke out across the Balkans. The Bulgarian revolt was quickly and savagely subdued, but the fighting in Herzegovina and Bosnia continued. Taking advantage, the two semi-independent Principalities of Serbia and Montenegro proclaimed their independence and declared war on the Ottoman Empire on 18 June 1876.

The Serbian army commanded by the Russian General Cherniaev, adopted an ambitious plan of attack. The army was poorly equipped, despite an influx of volunteers. The southward advance was halted and the Ottoman commander Abdul Kerim concentrated 40,000 troops at Niš and advanced up the Morava valley towards Aleksinac. Cherniaev had less than 30,000 men, stretched across a long position and the Ottoman’s concentrated their attacks routing the Serbian army.

A one-month truce allowed peace negotiations, but when these broke down a renewed Serbian assault was repulsed and an Ottoman counter attack forced the Serbs back to Deligrad. With Russia threatening a war a peace agreement was reached.

War broke out again when Serbia took advantage of the Russo-Turkish War of 1877 to capture large areas of Old Serbia. The subsequent Congress of Berlin recognised full Serbian independence within expanded borders, although not all the areas the Serbian army had occupied.

This is a beautiful book, lavishly illustrated with prints and photographs. It covers everything you could need to understand the Serbian army of the period. Organisation, weapons and most importantly, uniforms are comprehensively covered.

I am not aware of any wargame figures for this period. The basic uniform isn't much different from Romanian troops (even some ACW, French and Russian figures could work), with the big exception of the distinctive forage cap. A bit of work on the kepi with a file might work, at least in 15mm or smaller. Ottoman's are well provided for in 1877 ranges. 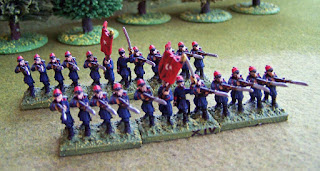 As a history of both wars it is more limited. It is written solely from a Serbian perspective and it desperately needed maps. The author of course knows the country, but the general reader will need a good detailed map of Serbia to follow the text.

There is very little written in English on these wars and therefore this is a much needed study. Recommended.
Posted by Balkandave at 18:34