Game of Thrones on the tabletop

The latest series of Game of Thrones has inevitably revived my interest in gaming the hit TV series.

I am using Lion Rampant rules, which allow decent size forces and a quick and simple game.

For this game I went for a busy table in terms of terrain, which provides quite a challenge for armies that have limited light units.

The Lannisters are on the left. They were slow off the mark, allowing the Stark and Tully force to establish a good defensive position by the farm in the centre and to skirmish on the left. 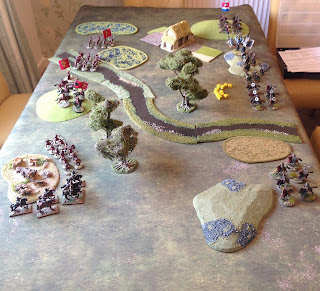 The Lannister bows took some time to get through the woods and establish a good fire base by the stream. But when they did, their firepower (4+) to hit began to tell. However, too late for the heavy Lannister foot that was driven off by the Tully horse and foot combination. 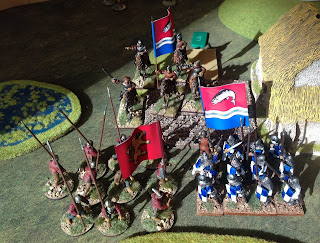 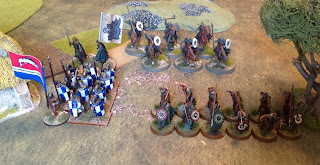 With the Stark knights and Tully horse working around the flanks, it was game over for the Lannisters. Tywin's last stand! 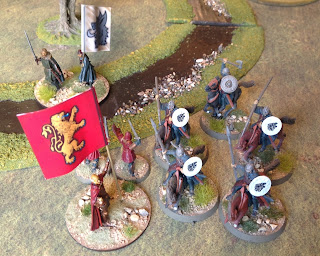 I have adapted my figures mainly from the LOTR range, with some generic medievals as mercenaries. Plus the Dark Sword range as character figures. However, specifically designed figures are on the way.

CMON have a Kickstarter project with figures based on the Song of Ice and Fire books. Presumably cheaper than licensing the TV series. The starter set includes 103 miniatures, together with rules, cards and tokens, for what looks like an interesting game as well as some superb looking sculpts.

It has been massively oversubscribed and a number of stretch goals have been reached, releasing even more figures. It ends on Wednesday, so you just have time to get in at the outset of what should be a long term project. Delivery is scheduled for April 2018 - I can't wait! 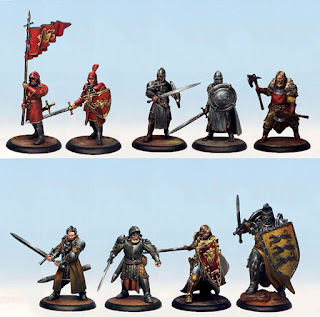