I picked up this Osprey Elite 156, written by Gordon Rottman, in a second hand bookshop while on holiday. It was first published in 2007 and is still available on the Osprey site, at a discounted price as well. 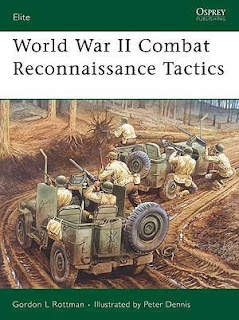 It starts with an outline of the purpose of reconnaissance and then the type of missions. Essentially, the job is to collect information, rather than combat with the enemy. The author then describes the various types of recce units and their mobility. This varied between armies and the theatre of operations.

The second half of the book discusses the varied equipment recce troops carried. They obviously travelled light, but also needed intensive firepower to extract themselves. He also discusses the different types of communications - from messages to radios. Finally, the author makes some national comparisons between the US, GB, German, Russian and Japanese recce units.

For the wargamer this is a very useful book. Actions involving recce units are often at a scale that are easily reproduced on the tabletop and they often have a balanced all arms composition that gamers like. This book includes useful diagrams that shows the gamer the different ways recce units moved across the battlefield and how they prepared for a mission.

Some 15mm recce units for the tabletop.

First up some German light armoured cars supported by Fallschirmjager.

Then some British armoured cars and Bren carriers.

And finally, recce units often not only retained cavalry designations, they were actually horse mounted in many armies. Here are some Greeks. 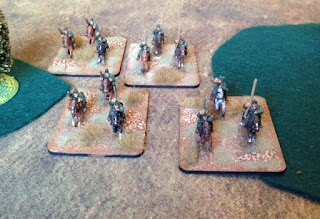