If you are a wargamer who thinks German troops should always get a bonus, then this may be the book for you. Trevor Dupuy is the author of 'A Genius for War: The German Army and general Staff, 1807-1945' and he sets out the arguments for the exceptional military excellence of the German military.

He came to the subject by looking at the amazing recovery from defeat the German military managed in WW2. He argues that German units had a 30% combat superiority per man over the British and Americans at the time of the Salerno landing, and this had only dwindled to 20% by mid-1944. As he refined the model it showed that German soldiers inflicted three casualties on the Allies for every two they incurred. He also noticed that board game firms like Avalon Hill had given similar weightings to achieve reasonably faithful outcomes.

When applying this model, in less detail, to WW1 he found a similar 20% combat effectiveness. When he discussed these findings with veterans, they tended to confirm the findings.

This book is essentially about explaining why this combat superiority existed. He argues that it isn't anything inherently superior about Germans. Instead it is the institutionalising of military excellence that accounts for the difference. For example, Germans fighting outwith the military system in the American Civil War did not have a similar combat superiority.

He points out that the international reputation for military excellence didn't start until the mid-Eighteenth-century and not really until the nineteenth century. This means that the answer doesn't lie with the men, but in the structure of the German military establishment. He argues:

"The fundamental explanation of German combat ability and of the quality of German military power as demonstrated in two world wars, lay in the organisation and operation of the Prussian/German General Staff."

The author therefore takes us through the development of the German military system. The focus is on the general staff system, which although it had its failings, did produce many more outstanding generals than its contemporaries. It was the only significant military professional development that was not matched by other countries. This system not only produced good generals, but it also encouraged individual initiative at all levels. This is illustrated by Prince Frederick Charles statement to a blundering Major during the Franco-Prussian War who claimed he was following orders, he said:

"His majesty made you a major because he believed that you would know when NOT to obey his orders."

Of course this system broke down with Hitler, who ignored this dictum, contributing to some of Germany's worst defeats. They were not geniuses because they made no mistakes - they just made fewer than their opponents.

The author makes a convincing and well argued case for his thesis. Recommended reading, particularly for wargamers. 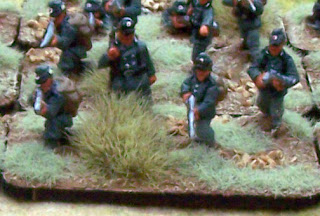