Joseph Brant and his World

My recent Canadian trip was for a conference in the City of Burlington, Ontario. The Main Street was named after a Captain Joseph Brant, which I assumed was a Canadian or British military officer. However, the story is actually much more interesting. 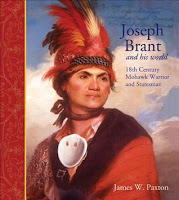 Joseph Brant was a Mohawk (Kanien'kehake) leader who lived in what is now over the border in New York State. So he was what I was brought up to describe as a Red Indian; these days correctly known as First Peoples and First Nations. As a wargamer my collection also includes what most firms describe as Iroquois. This turns out to be a derisive French word that means "the killer people". The proper name for the Six Nations is Haudenosaunee.

A bit more research led me to a local bookshop and a book written by James Paxton, 'Joseph Brant and his World'. He sets out the North America that Joseph Brant was born into in 1743. This was a period of almost continuous warfare, starting with the War of Austrian Succession (1744-48), and the Seven Years War (1754-60) in which the British colonies contested North America with the French. The Six Nations, including the Mohawks, mostly fought with the British, and Brant aged only 15 fought in several campaigns, including the siege of Fort Niagara and the fall of Montreal.

Brant received a British education that included a spell in Scotland and developed his connections across the territories, often in the employment of the Indian Department. He fought in Pontiac's War (1763-65) and while that fizzled out, the land disputes continued.

He gradually took on a leadership role, with his wife Molly, and persuaded the Six Nations to support the British in the American Revolution. This ended badly for Brant and his peoples, who were scattered, with many ending up in Canada.  It was during this war that he was given a commission as a Captain and took part in a number of raids and other actions.

His post-war life in Canada is of less interest to the military historian, but involved many disputes over land for the First Nations of Canada. These are still live political issues to this day. Joseph Brant died in 1807. His son fought for the British at Queenstown Heights in 1813 and the role of the Six Nations is recognised on the battlefield site. 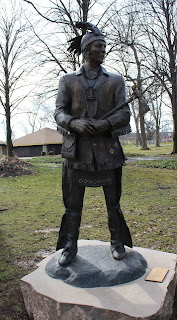