The Black Sea - an historical journey

'Black Sea' by Neal Ascherson is about that large inland sea, which has had a huge influence on the history of Europe and beyond. It was first published in 1995 and it has been sitting on my to read shelf since I picked up a second hand copy a couple of years ago. 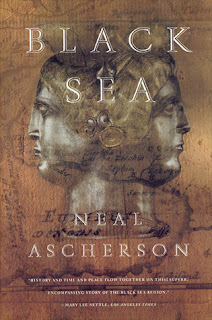 The book focuses on the northern coast of the Black Sea which includes the early Greek colonies and their interaction with the nomads of the steppes. These include the Scythians (the subject of a brilliant recent British Museum exhibition), followed by the Sarmatians, Goths, Khazars, Huns, Mongols and Turks. Cities have come and gone, often lost in the numerous conflicts that have passed through the region.

The Balkan coast, most familiar to British tourists, gets little attention and the same applies to the Turkish coast. The Russian and Georgian coasts on the other hand are covered - probably the right balance as the recent conflicts in Abkhazia will be less familiar to western readers.

This is more a history book than a travelogue, although there are elements of both. The author does stray somewhat from his subject, drifting geographically as a particular story takes him off at a tangent. He also doesn't avoid the geology of the Black Sea and the shocking man made pollution, from the great rivers that pour into the sea.

The story of an American jellyfish, the Mnemiopsis, which probably arrived in the water ballast of a freighter, is particularly shocking. Between 1987 and 1988 it consumed almost the entire zooplankton population of the Black Sea and the Sea of Azov, wrecking the Black Sea ecosystem. Growing to 700 million tons of translucent jelly that has no natural predator.

I would have preferred a bit more structure to the book that does rather lose its way in places. However, it is elegantly written and covers bits of history that deserve greater attention.