The Bruces in Ireland - Battle of Faughart 1318

This year is the 700th anniversary of the culmination of the Bruce brothers invasion of Ireland that largely ended with the death of Edward Bruce at the Battle of Faughart (Dundalk) in October 1318.

After Bannockburn, Robert the Bruce opened a second front against the English by invading Ireland, which at this time was largely an English domain. Historians are divided on his motives, but it seems likely that he hoped firstly to stop Ireland being used as a jumping off point for English attacks on the west of Scotland. A grander plan was to take Ireland as part of a grand Gaelic encirclement of England through Wales. It was also a useful way of keeping his excitable Brother Edward busy, by giving him a kingdom of his own.

The invasion in 1315 initially went well. Anglo-Irish forces were defeated and in 1316 Edward was declared High King. In practice, his control of Ireland was largely based in the north with plundering raids in the south. Ireland suffered a terrible famine during these years, which severely limited the ability of armies to campaign.

In 1318, Edward made a typically reckless move south through the Moiry Pass to invade the south, without waiting for reinforcements from Scotland. Our sources for the battle are very limited and some are frankly absurd. However, it appears that Edward's modest force deployed on higher ground with his Scots in the front row and Irish troops, furnished by the de Lacys, behind. It is likely that he would have had a small number of knights and archers.

The Anglo-Irish strength would be based on heavy knights with some support from feudal spearmen and archers, hastily levied from local landowners and towns, as the attack was unexpected. They were led by John de Birmingham. The Anglo-Irish obviously had sufficient knights because they broke through the Scots and killed Edward Bruce. He was killed by John Maupas and chopped to pieces. What was left of him is buried in the graveyard at Faughart.

The economic impact of the invasion meant few mourned Edward's passing in Ireland. As the Irish compiler of the Annals of Loch Ce puts it:

"Edward Bruce, the destroyer of all Erin in general, both English and Gael... no better deed for the men of all Erin was performed since the beginning of the world.... for theft and famine destruction of men occurred throughout Erin at this time."

For further reading, I would recommend Sean Duffy (Editor) 'Robert the Bruce's Irish Wars'. This is a series of essays by different writers and includes a translation of primary sources. For a fictional account, there is Nigel Tranter's 'The Price of the King's Peace' (1971) - excellent as always.

I used L'Art de la Guerre rules for the refight in 15mm. A pretty straightforward game, reflecting the uncomplicated tactics of the period. It was a 100 point a side game and the Scots won. The bowmen didn't soften up the spearmen enough and the knights struggled up the hill to breakthrough. Of course, as in most historical battles, the real armies were not equal! 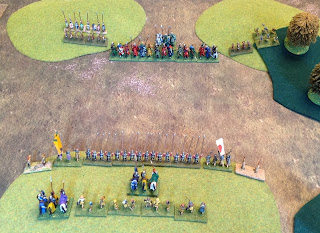 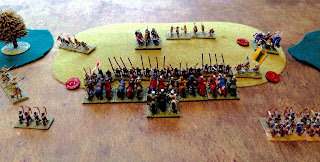