Dust Upon the Sea - raiding in the Aegean

'Dust Upon the Sea' is the wartime memoir of W.E. Benyon-Tinker, an army officer seconded to a naval special service flotilla operating in the Aegean during 1943-45. It was published in 1947 and I found it lurking in the corner of a second-hand bookshop in Inverness. There are a few copies knocking around internet suppliers, although at prices significantly higher than I paid, or frankly would have paid. 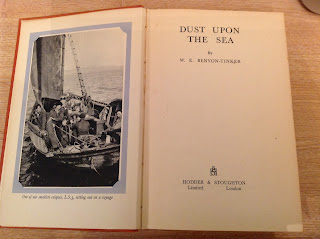 The Levant Schooner Flotilla consisted primarily of caiques. These are small Greek sailing vessels, aided by a small engine, that rarely managed to get above eight knots. Based in Beirut they were essentially a taxi service for raiding forces provided by LRDG and SBS detachments, used to attack German garrisons on the Aegean Islands.

The author describes a number of his trips as the war developed, before the Germans abandoned the islands as the Russians entered the Balkans and threatened their lines of communication. As a signals and intelligence officer, the author was in the position of neither playing an active role in handling of the boats or the raids themselves. This means the narrative is a bit of a travelogue, not uninteresting, but it does get a bit tedious at times.

There are other books that cover the strategy and combat better, including the memoirs of Michael Woodbine Parish in 'Aegean Adventures'. However, one of the books real strengths are his extensive collection of wartime photographs.

I can't say I would recommend this. As the author candidly admits, he isn't a writer, but it might inspire a game or two based on an island raid. And it just so happens I have some figures that might just do the job!