T-90 Standard Tank - The First Tank of the New Russia.

The latest in the Osprey Vanguard series covers the primary Russian Main Battle Tank of the modern era, competently described by the master tankie, Steven Zaloga. 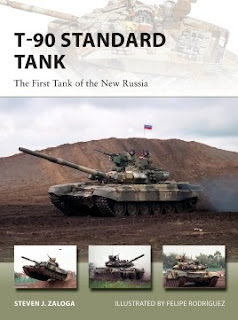 The T90 is a development of the T72. The author outlines the troubled development of the tank, beset by the economic problems facing Russia at the time and disagreements amongst the Russian military on the way forward. As usual with a Vanguard publication there is a detailed technical description, with plenty of photos and colour plates.

The T72 performed badly in the Gulf wars and in Chechnya, which damaged its reputation and the all important export orders. It is at least questionable if this was due to the tank or its poor deployment and crew training.

The T90 is more than a rebranding. It has all the features you would expect in a modern tank. Offensive armament including guided munitions, and defensively including reactive armour. An important export win has been the Indian army and Algeria.

The book ends with a description of its internal rivals and the many variants. This includes all the standard engineer variants, but also the unusual tank support vehicle, known as the 'Terminator', designed for the urban environment's tanks have been deployed in during recent conflicts.

Essential reading for those interested in the modern Russian army.
Posted by Balkandave at 08:30