It's April and at least one of my 2018 projects is finished - well until another 'must have' unit comes along!

Any Bolt action force needs a decent anti-tank gun and the French had probably the best at the start of WW2 with the 47mm Mle 1937. I used a Lorraine 37L as a tow. In practice, it was usually towed by a Laffly six wheeled truck. Both models are made by Mad Bob Miniatures (not an April fools joke!) and the crew are Warlord. This is the first time I have bought a model from this supplier. They are resin kits, just a few parts that went together well - recommended. 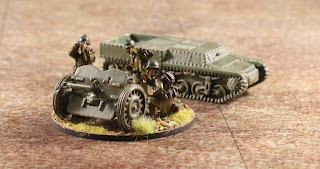 Wargamers always paint the bog standard units last, and I am no exception. A squad of infantry with LMG and VB launcher.

Finally, the whole army together.