The Bernicia Chronicles - Warrior of Woden

Warrior of Woden is the fifth and latest book in the Bernicia Chronicles by Matthew Harffy. If you have read my reviews of the earlier books you will know that I am a huge fan of this series. If you are suffering from Bernard Cornwell withdrawal symptoms, this is the series for you. 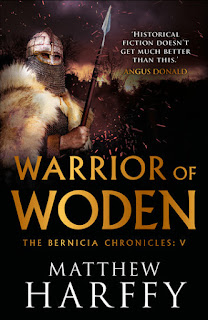 The year is AD 642 and the setting is Anglo-Saxon Britain. Our hero, flawed of course, is Beobrand. He is now an established and wealthy warlord, with his own lands and hearth guard. However, the warring kingdoms of Britain are not going to allow him to rest easy.

Penda of Mercia and his allies invade Northumbria and Beobrand is called upon to support King Oswald. There is treachery, a huge battle (Maserfelth) that rolls on for several chapters and plenty of skirmishes. Of course Beobrand survives, but not without personal loss and few scars.

The advantage of this setting for historical fiction is that we know very little about it. A couple of less than reliable primary sources and a growing, but incomplete, archeology. The author has largely used historical figures and followed as much of the historical narrative as he can. Names and places are borrowed from the same period, if not exactly as they where.

Military tactics were pretty straightforward. Some preliminary skirmishing followed by the crunch of the shieldwall. Each Lord had his own war band of warriors, reasonably well equipped with spear, sword, chain mail and shield. For the big battles they would be supplemented by the part-time militia or Fyrd - less well equipped and trained. The numbers on either side would not have been huge.

For the wargamer there are plenty of figures and rules. There is a new edition of SAGA coming out which is ideal, although I usually use Lion Rampant, or Hail Caesar for the big battles.


This is a great read - highly recommended.
Posted by Balkandave at 21:43