The Kuban 1943 - The Wehrmacht's last stand in the Caucasus.

The Kuban campaign of 1943 is covered in the latest Osprey Campaign publication by Robert Forczyk.

After the disaster at Stalingrad, Hitler's push into the Caucasus was looking beyond hope. However, true to form, Hitler refused to abandon his objective of exploiting the old fields and ordered his armies to hold the ground they occupied. The German 17th Army did their best, but they were forced back into the Kuban bridgehead. 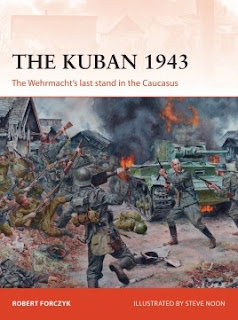 This book covers the efforts of this army to hold onto the bridgehead and the many offensives by Soviet armies to destroy it. In many ways it is a textbook defence of a bridgehead. The terrain was eminently suitable for the defence, enabling German forces, usually outnumbered 3:1, to hold their positions. Hitler's objective of using the Kuban as the base for a renewed offensive was never realistic and it pulled away troops that would have been better deployed in the Kursk battles. Equally, while it did tie up significant Soviet forces, they were generally not the the best equipped, particularly in terms of armour.

Unusual features of the campaign included the extensive deployment of air support by both sides and the use by the Soviets of naval infantry. They managed to establish an important bridgehead near the city of Novorossiysk, known as the Malaya Zemlya, which is today a national memorial park. In the north of the bridgehead there was extensive combat in marshland.

The German forces also included six Romanian divisions and Gebirgsjager divisions. The Soviet air forces also made use of smoke pots to mask the German artillery, a tactic I had never heard of before.

After the failure of the Kursk offensive, Hitler eventually agreed to the evacuation of the Kuban. The 17th Army conducted a masterful withdrawal and retreated over the Kerch Straits to the Crimea. The Kriegsmarine and Romanian navy played an important role in this part of the campaign.

For the wargamer this campaign offers actions that are far from the typical Russian Front scenarios and this book is all you need to recreate them. Lavishly illustrated with excellent maps. 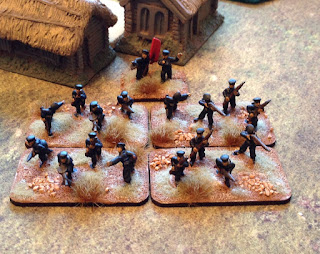