One of the few positive British actions during the fall of France in May 1940 was the counter-attack near the city of Arras. This is the subject of Tim Saunder's latest book, published by Pen and Sword. 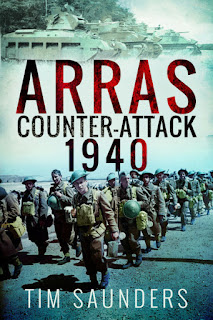 The plan was to strike into the flank of Rommel's overextended 7th Panzer Division with two columns each consisting of a tank regiment supported by a motorised infantry battalion. The move to the start line along the Arras-Doullens railway line was beset by communications failures, with both French and British units. Despite this, the attack scored some initial success. The Matilda II infantry tanks were largely impervious to the German 37mm anti-tank guns and the armoured thrust cut through Rommel's infantry. The situation was saved by some fortuitously positioned artillery and Rommel's recovery, bringing his tanks and support weapons back to save the day.

The author sets the scene with an outline of British military thinking on the use of tanks and mobile warfare, which contributed to the ultimate failure of the attack. Deploying tanks piecemeal meant that they were unsupported by infantry and other support weapons when they were most needed. While the Durham Light Infantry were motorised, there had been no training with tanks or artillery. The German command and communication were excellent, enabling them to respond quickly, while British units had to resort to the use of runners. Several tank officers were killed when they had to get out of their tanks. Finally, German air superiority ensured that Stuka's could be deployed quickly as flying artillery over the battlefield.

This is not to say that the counter-attack at Arras achieved nothing. The German High Command was already concerned about their flanks and believed a counter-attack was imminent. Arras put flesh on those bones and contributed towards the Halt Order, which probably saved much of the BEF at Dunkirk.

Writing a history of operational level actions in World War Two is no easy task. The various dimensions and the speed of action can quickly confuse the reader. In this book, the author carefully breaks down the different parts of the battle and makes excellent use of maps. The result is a very readable account of the background and the battle itself. The book is also profusely illustrated with all the early war equipment that most readers will be less familiar with.

It also provided an excellent scenario for a test game of the new edition of Blitzkrieg Commander using 15mm figures. We played this scenario on Sunday at GDWS. Sadly, playing the Germans, my generalship was not up to the Rommel standard. Committing my tanks without infantry support was pretty inexcusable having read this excellent book! 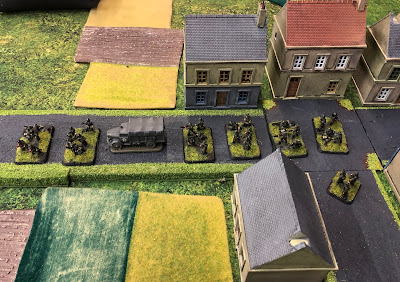