For God and Kaiser

My holiday poolside reading was Richard Bassett's book on the Imperial Austrian Army, 'For God and Kaiser'. 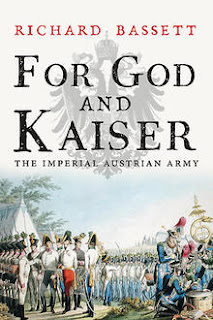 This substantial tome (nearly 600 pages) has been sitting on my reading shelves for some time. I was a bit nervous about selecting it for a holiday read. Would it be too dense and hard work for a holiday? I needn't have worried, this book is both magisterial and readable - not always a combination in my experience.

He might have subtitled the book, 'The Habsburg Army', because in essence throughout its long history that is what it was. The boundaries of the Habsburg lands shifted, but the army's role was always to support the dynasty.

The author starts in the 17th century with the 30 Years War. On the 5th June 1619, Archduke Ferdinand was rescued from Protestant noblemen in the Hofburg by Imperial Cuirassiers - an element of the army that was to be one of its strongest elements for several centuries. We then have a mix of narrative history with an analysis of the various reforms. Through the Seven Years War, the Napoleonic period and into the later 19th century. The story ends with WW1 and the dismemberment of the Austro-Hungarian Empire.

This is a sympathetic history of the armed forces. In most periods they started badly but got better - not dissimilar to the British army of the times. We remember the Seven Years War for the Prussian Army and Frederick's triumphs, but the Austrian reforms left them in a stronger position by the end of the war. Archduke Charles was one of the best generals of the Napoleonic wars, who had the misfortune to come up against Napoleon at his best.

The author picks out a number of similar consistent themes. Despite its early years, and the Habsburg Catholicism, the army was largely indifferent to religious belief. Anti-Semitism was a penal offence under Franz-Joseph and Jewish officers were a common feature in many regiments.

Military strategy was often cautious. No general wanted to hazard annihilation - the army always had to be able to fight another day. This meant few gambles were taken and Austrian armies often failed to pursue defeated enemies. Between 1620 and 1918 it won more than 350 victories, a number far greater than its defeats.

I really enjoyed this book, improved by the Cretan sun. If you want to understand the big picture of the Imperial Austrian armies, you could do no better than this book.

I can probably field just about every Austrian army on the tabletop. They were almost always a key player in the Balkans. Here are just a few examples.