This is Peter Hopkirk's account of the events in Central Asia after the Russian revolution in 1917. As the revolution failed to spread to western Europe, Lenin turned east towards British India and China. In many ways a continuation of the 'Great Game' that Britain and Russia had played in Central Asia for most of the previous century. 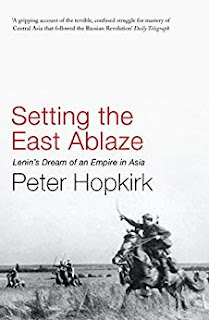 This is a good example of the old cliche that truth is stranger than fiction. Our story starts with eccentric British agents on the Silk Road attempting to disrupt the Bolshevik advance as the White armies withdrew. They had some entertaining adventures but appeared to achieve little as the Bolsheviks took over cities like Tashkent and used them as a base to train revolutionaries from India and elsewhere.

Some of the new Soviets caused Lenin a few headaches. Not least at Suizran, which ordered the nationalisation of women! The logic was that the bourgeoisie had taken all the most beautiful women.   Lenin quickly ordered this order withdrawn.

Other colourful characters included the former Turkish General, Enver Pasha. He brought together a number of Muslim bands known as, Basmachi, who had the support of the local population and fanatical courage. Until the numbers and firepower of the Bolsheviks wore them down.

The most bizarre figure was the Russian Baron Ungern-Sternberg, rightly known as the Mad Baron. Starting out as a Cossack commander, he raised a Mongol and White Russian army of some 6,000 men.  He was supplied by Japanese, who had plans of their own in Asia. He hated all Bolsheviks and Jews and committed some of the worst atrocities of the conflict, planning to plant an 'avenue of gallows' from Mongolia to Moscow. After creating chaos he ended up in front of a Bolshevik firing squad.

There were many other characters, but you get the gist.

For the wargamer, this is the territory known as the back of beyond. The Copplestone range of 28mm figures captures the spirit of the period brilliantly.  Partisan Press also publishes rules (Setting the East Ablaze) and scenarios for the period.

It's not a period I have gamed, but I do have some suitable figures including these Cossacks. It would be even better if I could find the rest of them! 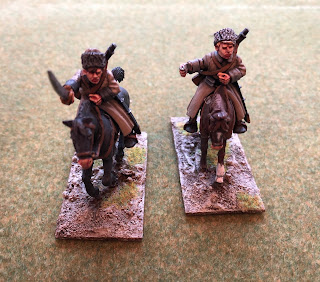 And I have some Russian infantry. 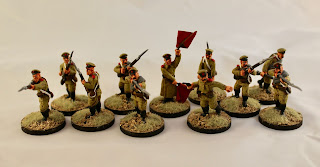