Croatia - A Nation Forged in War

I thought I had read most, if not all, of the general histories of Balkan countries. However, I missed the third edition of Marcus Tanner's history of Croatia when it was published. I remember his insightful reporting from the region for the Independent in the early 1990s. 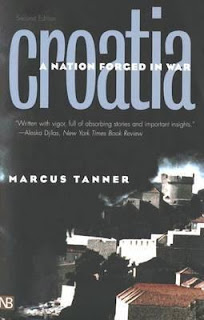 The author is a journalist rather than a historian and an eyewitness to the break up of Yugoslavia. I suspect this explains why the focus of the book is on the 20th century rather than earlier periods. In fairness, our sources for the first Croatian state are pretty thin, but it does highlight the fact that Croatia has only been an independent state for a very short time in its long history.

The first Croatian state arguably ended with the death of King Zvonimir and the subsequent Hungarian invasion. The Hungarian King Kalman consolidated Hungarian rule at the Battle of Petrova Gora in 1097 and subsequently reached an agreement with the southern Dalmatian clans in 1102, known as the Pacta Conventa. This was supposed to respect Croatian rights, but the ensuing eight centuries of mostly Hungarian rule whittled away at those rights.

Croatia was for most of this period the border between the Catholic West and the Ottoman Empire. This led to the country being split between the military border region, directly ruled by the Habsburgs, and inner Croatia, which had varying degrees of influence over local matters, under overall Hungarian control. We should not forget that the Dalmatian coast was also largely controlled by Venice, the basis for later Italian intervention.

The 19th century saw the beginnings of a growing effort to break away from Hungary, albeit still under the Habsburg Empire. The statute of  Ban Jelacic in the centre of Zagreb today reflects his role in the events of 1848. I recall impressing our Croatian police 'minder', when visiting the city with my football team, with my explanation of who he was to fellow supporters! 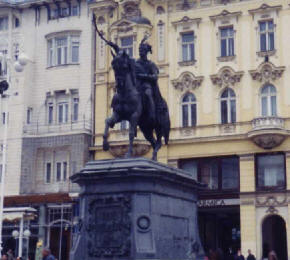 Croatia became a junior partner in the Serbian dominated Yugoslav state that followed the collapse of the Habsburg Empire at the end of WW1. The short-lived Fascist puppet state run by the genocidal Ustashe during WW2 ended with the liberation of the country by Tito's partisans in 1944. Tito was half Croat but took little interest in his home country.

Croatia had a degree of devolution during most of the Tito years and became independent following the collapse of Yugoslavia. It was during this vicious conflict that the book's sub-title 'A Nation Forged in War' comes into its own.


This is a very readable history and particularly recommended for anyone enjoying a holiday on the Croatian coast next summer. You still hear tourists talking about Yugoslavia!

And finally, for the wargamer, some 17th century Croats in Austrian service. 28mm figures from, I think, Old Glory.