The Army of Pyrrhus of Epirus

I doubt if most people today who use the saying a 'Pyrrhic victory', have much idea about the 3rd Century King of Epirus whose victories over the Romans formed the basis of the phrase.

Nicholas Sekunda has corrected that with an excellent introduction to one of the greatest generals of the ancient period for the Osprey Men At Arms series. 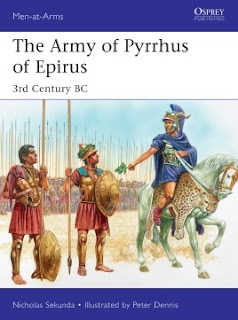 The ancient Kingdom of Epirus covered much of modern day Albania and part of northern Greece. Pyrrhus engaged his army, not only in Greece, but also in Italy and Sicily, before he died in the streets of Argos fighting the Spartans and their allies. He rarely lost a battle, which is why Hannibal rated him the second best general after Alexander. Modern opinion accepts he was a great tactician, if not a great strategist.

The author gives us an outline of his campaigns, but the focus of this book is on the army. This was a fairly typical successor army with the infantry phalanx and heavy cavalry on the wings. He also famously had elephants, which the Romans hadn't faced before. They devised an anti-elephant wagon which justifies a very fine, if speculative, colour plate in the book. The rest of the army was recruited from allies and mercenaries, often from the region the army was contesting.

As you would expect from an Osprey title, the book is well illustrated and has colour plates by Peter Dennis. This is a good introduction, and I would recommend Jeff Champion's book 'Pyrrhus of Epirus' if this whets your appetite for a more detailed history of this fascinating King.

For the wargamer who already has a Macedonian or Successor army, it is a short step to fielding a Pyrrhic one. I was looking for an army to field at the club today for a game of To the Strongest! So I dusted Pyrrhus down for action.

Sadly, my battlefield generalship is not up the same high standard as Pyrrhus. The veteran Macedonian phalanx crumbled in the first clash against the Seleucids. 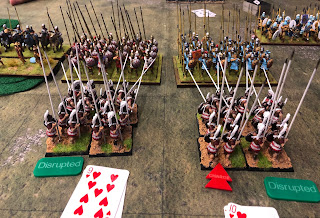 The elephant wing crawled towards the enemy. 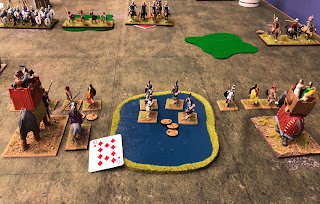 The cavalry wing didn't do much better, leaving Pyrrhus and his guard cavalry a little exposed. 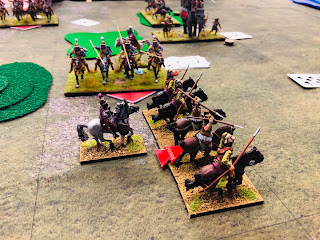