This rather weighty tome by Paul Barford has been sitting on my 'to read' shelf for some time. For those interested in the history of the Balkans, who the Slavs were and how they got to the Balkans can be a controversial issue, muddled by nationalist ideology. 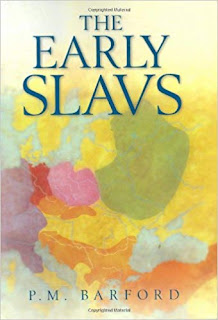 I am pleased to say the author has traversed this difficult territory very well. He sets out the evidence and draws conclusions based on an objective assessment. Where there is doubt, he says so, and the reader can reach their own conclusion.

He starts with the earliest references to a Slav identity, largely based in forest steppes. The started to expand in the 6th century by moving westwards into modern day Poland,  the Czech Republic  and eastern Germany, becoming known as the West Slavs. Those remaining behind in modern day Russia and the Ukraine became the East Slavs.

My particular interest is in the South Slavs who edged their way into the Balkans, around the Carpathian Mountains or along the coast into most of the modern day Balkan states. How far and where they settled is difficult to judge from the archaeological evidence, and we have limited written sources. For example, they certainly reached the Peloponnese, but the extent to which modern Greeks have a Slav identity, is, needless to say, very controversial!

Unlike the horse archers of the Steppes, like the Avars or the Huns, the Slavs almost sneaked into the Balkans over a long period of time. They started by raiding the usual manner, but then occupied lands that were underpopulated due to the weakness of the Byzantine Empire of the period. They assimilated local peoples and grew from disparate tribes to fully fledged states. Serbia and Croatia are the main states today, and Bulgaria was a mix of the Turkic Bulgars and the Slavs.

After explaining what we know about these movements, Barford covers the social structure, daily life, religion and trading arrangements of the early Slavs. There is a chapter on warfare, which is largely based on Byzantine sources, who describe how to fight them. The early Slavs occupied forest areas and were skilled in the use of ambush, using rivers to communicate and concentrate forces. They were lightly armoured, equipped with spear, shield and wooden bows. Barford argues that they did use horses, even if primarily as mounted infantry, with elites as conventional cavalry. They also circled wagons during a battle. Unlike the West and East Slavs, they made little use of strongholds, reflecting the terrain they occupied.

I don't think I have ever seen a Slav army on the wargame table, other than my own small force as part of a 15mm Bulgar army, which I think are Essex figures. Few rules guarantee generating enough terrain to allow them to fight in the way they successfully did. I see Gripping Beast have a small range of foot figures in 28mm and Old Glory have a larger range in 15mm.

My first choice 15mm rule set is L'Art de la Guerre, and their Slav list includes up to six elements of medium cavalry with the option of upgrading half of them to heavy. You can have a fortified camp, which I suppose covers the wagons. I don't think their time period, up to 1218, works for the Balkans, but they do have later Serbo-Croatian and Bulgar lists. FoG takes a similar approach to the balance of forces, and wisely has a specific South Slav list.

While this looks like a serious academic tome, it is very readable. The price (£61) might put off the general reader, but if you can get it second hand or from the library, it is well worth the effort.