Not a new book, but I recently picked up a copy of this Concord publication on the German siege of Sevastopol in 1941-42, by Hans Seidler. 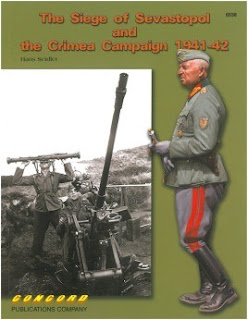 In September 1941, General Erich von Manstein was tasked with invading the Crimea and capturing the Soviet naval base at Sevastopol. He had two corps, totally seven divisions, supported by three Romanian divisions. The Soviets defended the city with elements from the Black Sea Fleet and the Coastal Army under Petrov. The city garrison had 19 marine battalions, one brigade and three regiments of infantry, later reinforced from Odessa and Kerch.

Manstein tried a quick storming of the city after his Crimean breakthrough, but this attack failed and both sides settled down for a siege. He brought up heavy artillery and tried several large scale assaults, but the fortifications held. The bombardment by land and air continued into the summer months and the Germans finally breached the outer defences in June, before the fortress collapsed on 9 July. Some 90,000 Soviet troops were captured.

After a short introduction, this book includes dozens of period photos. They cover a wide range of units and equipment, mostly German, but also destroyed and captured Soviet troops and kit. They include a rare glimpse of the super heavy rail guns used during the siege. In addition, there are four colour plates by Dmitry Zgonnik of German troops during the campaign.