Wargame projects inspired by my travels have a tendency to taper off as the memories of the visit dim. So, I kept a few books back to keep the interest maintained as I tackle the mountain of lead.

Ron Lock's study of the Ladysmith campaign is one such book. While the focus of the book is the famous battle, it is in reality a study of the campaign to break through the Boer lines on the Tugela River and relieve the siege of Ladysmith. While Spion Kop wasn't the largest battle of the campaign, it remains one the best known. Not least for me as a Liverpudlian, in the Kop End of Liverpool Football Club's Anfield home. So named because of the large numbers of men from the city who died on that hill in 1900. 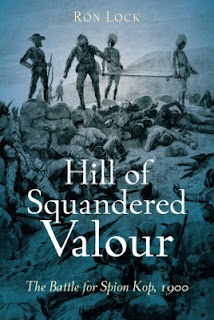 I covered the less than glorious causes of the Boer War (sometimes called the Second Boer War) in my review of Thomas Pakenham's magisterial book on the whole conflict. Ron Lock briefly covers the same ground before outlining the opening battles, which although technically British victories, saw the army forced out of Natal, leaving Ladysmith with its large garrison surrounded. Ladysmith should have been abandoned, and the failure to withdraw forced the newly arrived field army to fight the Boers across an easily defended river line.

This led to the Battle of Colenso, and actions at Potgieter's Drift and then Trichard's Drift. General Buller commanding the Imperial forces was not well served by his subordinates in this campaign, not least Warren at Spion Kop. However, his own judgement was woeful, with opportunities to flank the Boer positions missed at both ends of their line.

The capture of Spion Kop, a hill 1400 feet high, should have split the Boer line. Its capture would allow the Imperial forces to attack, if not easiest route, Buller had already missed that opportunity, at least a practicable one.

The task was given to Major-General Woodgate's Lancashire Brigade. A hazardous night attack brought the Brigade to the top of the hill, but in the darkness they entrenched in the centre of the hill rather than the crest. The ground barely allowed for a two foot scrape, leaving the Brigade exposed to Boer artillery and gun fire for a whole day, with little food or water. Even worse, the position could not be supported by British artillery.

The following night confusion, and the complete absence of leadership by Warren, resulted in the British abandoning the summit. The Boers who had also withdrawn, quickly recovered and occupied the hill. 364 British troops died, 1,056 wounded and further 318 captured or missing. The dead were buried in their inadequate trenches, making this one of the most unusual and poignant battlefield memorials I have visited. 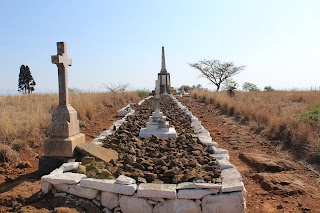 Buller eventually broke the Boer lines at the western end and relieved Ladysmith. The war ground on for another two years, before the Boer republics surrendered and were incorporated within the Union of South Africa.

This book is an excellent narrative history of the campaign with good maps and relevant illustrations.

I have made progress with wargame armies, well at least the British. This is my first excursion into 10mm, outwith WW2 and the Arab-Israeli conflicts, and I am impressed with the detail on the Pendraken models. The only challenge being the assembly of guns and wagons, with more super glue ending up on my fingers than the models!

First up are two units of British line, with a command base and some of the Pendraken buildings. 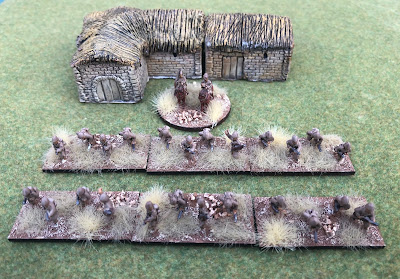 A unit of Lancers. 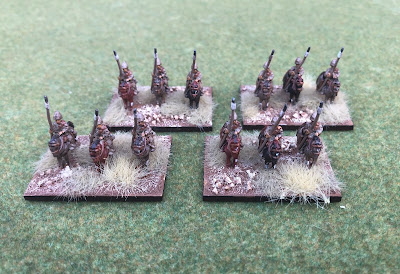 And finally, for now, some mounted infantry. 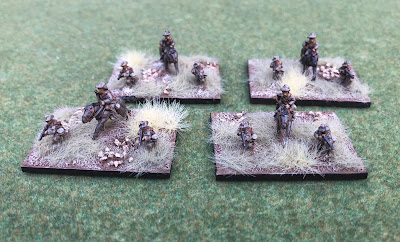 With the artillery, that should be enough for a 'Men Who Would Be Kings' battle group. With the option of extending it to a Black Powder army.

Next the Boers!
Posted by Balkandave at 15:03