The Scramble for Africa

I had partly read Thomas Pakenham's 'The Scramble for Africa' when I visited South Africa last month. While making a start on my 10mm Boers, I have been revisiting this excellent book to finish the bigger story. 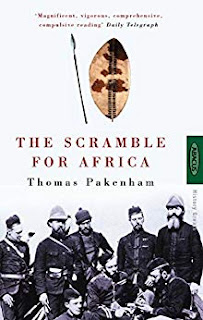 It is indeed a remarkable story. In the 1870s, Africa, with the exception of the coast, was a mystery to most Europeans. By the end of the century, the Scramble for Africa gave Europe virtually the whole continent: including thirty new colonies and protectorates, 10 million square miles of new territory and 110 million dazed new subjects. Africa was sliced up like a cake, the pieces swallowed by five rival nations – Germany, Italy, Portugal, France and Britain, not to mention King Leopold of the Belgians.

Pakenham takes us through the story, trying to explain why the Scramble took place, an issue that divides historians to this day. From the missionary explorers like Livingstone to the commercial exploiters like Rhodes, they believed they would be saving Africa from itself, and Africa would be the saving of their countries. Europe imposed its will either way at the barrel of the magazine rifle.

Fifty years later, independence was achieved largely at the barrel of similar rifles, but in the meantime, the continent was wracked with a series of wars. Until the outset of the Boer Wars, these were largely one-sided affairs, although that didn't mean the avoidance of defeats, as the British found in the Sudan and Zululand, and the Italians in Abyssinia. This book also covers some of the less well-known conflicts involving German and French troops, as well as the savage conflict in the Congo.

This is a narrative history of the conflicts. If you want to understand how the wars were fought, I would recommend Howard Whitehouse, 'Battle in Africa'. (Field Books 1987), which deals with how armies were raised, commanded and fought, together with the all-important issue of logistics. Africa is a very big place.

Back to the Boers. I have finished the first two units. Again, very nice Pendraken figures that are a pleasure to paint. I am currently being distracted by the arrival of Black Seas, but I will return! 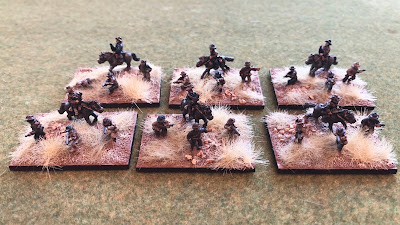