Opening the Black Box - Inside the Turkish Military

Those of us interested in military history, particularly wargamers, tend to focus on the equipment, organisation, and tactics of the armies we study. We rarely dig deeper to consider the organisational culture that drives those armies. For modern militaries, this isn't always easy, as, in all countries, there is a reluctance to open the door. For my Cyprus project, I thought I would see if I could take a closer look at the Turkish Army.

I anticipated that this might be a challenge, particularly in the English language. However, Mehmet Ali Birand's 1986 study, Shirts of Steel, was translated into a 1991 book. This is difficult to get hold of today except at ridiculous prices, but I did get a chance to read it in the British Library. The introduction outlines the scale of the Turkish armed forces of the period (800,000 troops, including 35,000 officers) and the critical role it plays in society (25% of the national budget).

Part one deals with the recruitment and training of officers. While vetting is part of all militaries, political vetting in the Turkish military is particularly stringent. Birand quotes one officer cadet who was dismissed because a cousin he had never met was jailed for inciting strikes. Ideology is an integral part of the training focusing on Ataturk's principles, particularly identifying separatist and extremist movements. Secularism is also important through the separation of religion and the state. Isolating the Army from politics is another principle, although that has not stopped the Turkish military from intervening when they believe Ataturk's principles are undermined. They are taught that their role is to protect the Republic from external and internal threats.

The experience of young officers once they join a unit is pretty demanding. Typically serving for ten years in the field before promotion to captain. While the pay was comparable with civil servants, there were fringe benefits, including housing, health care, shops, holidays and social clubs. The cream of officers enter the staff academies and become staff officers. It was less intensive than other NATO armies (one year instead of two) and more directive and theoretical. A unique feature is that all three services train on the same campus. The book outlines the structures of the General Staff in some detail and how it is supposed to work. A significant difference at this time was the minimal involvement of the civilian ministries in determining national military strategies. 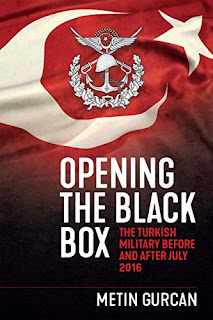 To bring the story up to date, I have also read Metin Gurcan's, Opening the Black Box: The Turkish Military Before and After July 2016. This is readily available and published by Helion. July 16 was the date of the failed military coup instigated by military officers but not by the High Command. This book is heavy going in places, but the author worked inside the military and was able to undertake qualitative and quantitive studies. As it was written after the coup, there is a focus on civil and military relations. After a theoretical discussion of military culture, he shows how the Turkish military was beginning to change well before the coup. Just analysing press release shows how the views of five Chief of Staff between 2002 and 2014 had softened their approach to politicians and the media. From 'active hostility' in 2002-6 under Hilmi Ozkok to 'delicate harmony' in 2011-14 under Necdet Ozel.

Modernisation is illustrated by practical measures, including recruiting female officers who had reached 3.3% of the total with a target of 5%. These included 96 colonels who typically worked in staff posts and 360 majors in unit commands. There were a staggeringly high number of colonels in the Turkish military, more than 6,000 or 15% of all officers. That is five times the ratio in the US military. The book also highlights other changes, often forced by bottom-up processes. These include improving the rights and status of NCOs, violations of soldiers rights and ending the headscarf ban for relatives on military sites.

The quantitative analysis includes a detailed survey of those serving in the Turkish military, which shows opinions that have moved some way from the descriptions outlined in Shirts of Steel. For example, junior officers thought the military's primary task was to protect against external threats, whereas senior officers thought it was still external and internal. This generational split is reflected in other responses. For example, even after the election of Erdogan's government, half of the officers did not think secularism was under threat. However, very few officers trusted the parliament, reinforcing the long-standing distrust of politicians. There are similar attitudes towards the media and the police.

The last chapter covers the July 2016 coup. The more egalitarian views of younger officers clearly provided a braking mechanism that stopped the limited uprising from turning into a full-fledged insurgency. But, by any standards, it was an extraordinarily poorly organised coup. There has been a large scale purging of officers (20,000 so far), particularly senior ranks, since 2016, which is still ongoing. Only this week, StateWatch, a UK-based international rights organisation monitoring the state and civil liberties in Europe, says an algorithm used to detect alleged government opponents in the Turkish Armed Forces, TSK, has been used to persecute thousands of people.

While the post-coup changes have already brought the Turkish military under greater civilian control, it remains to be seen how far the organisational changes will go and how they will impact operational effectiveness. In addition, the Turkish military is engaged in Syria and internal security actions against Kurdish groups.

Neither of these books is likely to attract the general reader, but they remind us that we sometimes have to dig a bit deeper to understand military history.