The Normans in the South is one of the great stories of history, brought to life for me in the books of John Julius Norwich. Georgios Theotokis has picked out one of the most interesting of the many characters in the story, Bohemond of Taranto. 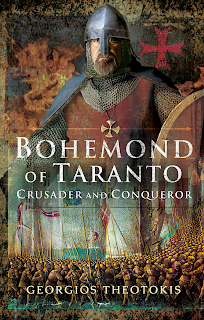 He came from the Hauteville family, son of Robert Guiscard. His father put his first wife, Bohemonds's mother, aside, technically because of the degree of kinship, but actually for a more favourable marriage to bind the Lombard lords to his cause. While technically a bastard, he was still brought up as a knight and became one of his father's most trusted commanders. Normans, or more accurately northern French as one in three were not actually from Normandy, fought in all the regional conflicts as they built up a power base in Southern Italy and then Sicily.

Fighting for and against the Byzantine Empire encouraged the next big leap, the invasion of the Balkans. It was here that Bohemond considered the possibility of taking the Byzantine throne. This part of the story is told in another of Georgios' books, The Norman Campaigns in the Balkans 1081-1108, although, as I say, the sources for this campaign are limited. Despite being defeated by the Normans at Dyrrhachium and elsewhere in Greece, the Empire under Alexios hung on.

After his father's death, Bohemond contested the succession, but his brother was backed by Roger of Sicily, who came to his support with large numbers of his Muslim troops. The Norman-Sicilian army is one of my favourites of the period. None the less Bohemond did carve out a chunk of Southern Italy, including Taranto.

But this was never going to be enough for the restless Bohemond described as 'always seeking the impossible'. The First Crusade was a new opportunity to carve out more lands, and you can imagine Alexios' joy when Bohemond arrived as one of the Crusade leaders. His experience in the region, particularly fighting Turkish horse archers, made him the true military leader of the First Crusade. He captured Antioch and carved out the territories in that area for himself and his close family. Finally, he found a decent excuse not to hand it back to Alexios!

When he needed to get back to Europe to seek support, he got around the Byzantine blockade in a coffin. A great story in itself. He got to France and married the King of France's daughter, leaving Antioch in his nephew Tancred's hands. Which handily meant he could get out of another treaty with Alexios. The wily Byzantine's had met an equally wily foe.

He died in Italy on 7 March 1111, and his body is in a mausoleum in Canosa. A cathedral he helped design, not accidentally in a Byzantine style. Bohemond's longing, even in death, to equal the glory and prestige of the Byzantine emperors is palpable in his choice of a final resting place in what was, essentially, a copy of the imperial mausoleum in Constantinople.

The author argues that 'Bohemond was, beyond any doubt to my mind, a great soldier with vast experience in fighting overseas. His aggressive strategy in every operational theatre he was active in speaks volumes about his daring character and dynamism that he wished to portray throughout his life.' It's hard to disagree with that view. He had great successes and failures, perhaps summed up by the inscription on his mausoleum (which I must try and see):