Two for one in this review of reproductions of WW2 manuals on unconventional warfare. First up is the German Army Guerilla Warfare Pocket Manual 1939-45, edited by Charles Melson.

This manual covers a couple of German publications. Arthur Ehrhardt's 1935 Kleinkrieg (Guerilla War) and the High Command's own 1944 Bandenbekamfung (Fighting the Guerilla Bands). The Germans had a particular hatred of guerilla war that went back to the Franco-Prussian War and their strategic need to fight short wars, avoiding wars of attrition. This is summarised by the doctrine 'Against an open foe fight with chivalry, but to a guerilla extend no quarter.'

In WW2, the Germans faced a number of resistance struggles, but the most challenging guerilla warfare was in the Soviet Union and in the Balkans. Ehrhardt's book was first published in 1935 and reprinted and updated during the war. It drew extensively on German experience of irregular warfare from the Peninsular War to WW1 in the Balkans. He highlights the tactics used and the responses devised by local commanders. The High Command developed these into a series of directives during the war, which ranged from encouraging local collaboration to genocide.

The methods would vary depending on local circumstances, 'whatever succeeds is right' said Hitler in 1942. These included an emphasis on command and control, passive and active measures. The wargamer will find the instructions for the deployment of 'hunter' units as providing the basis for tabletop actions, as they involve platoon to company-level operations. Infantry squads would include local guides and were supposed to operate for up to two weeks without re-supply. The idea was to imitate the fighting techniques of guerilla bands, supported by aircraft, artillery and armour. Like traditional German doctrine, encirclement-annihilation operations were preferred. The manual includes diagrams of both tactics and methods.

On the other side of the hill, I also picked up a copy of Lester Grau's The Red Army's Do-It-Yourself, Nazi-Bashing Guerrilla Warfare Manual: The Partizan's Companion, 1943. As David Glantz points out in the introduction, while the Soviet leadership espoused guerrilla war, they did not want the common people to rise against the Germans. Even in these perilous times, the Soviet government wanted control. This meant the initial efforts inserted groups into rear areas achieved little. They learned from this and created local units led by military officers. The 1943 manual was designed to train guerillas to a common standard. Individual partisans can read it but are really intended for squad and platoon-level instruction. 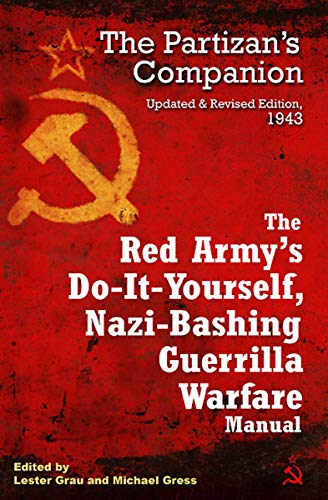 Partisan warfare was very effective. Soviet historians credit the partisans with tying down 10% of the German army and killing almost a million enemy soldiers. Some 1,100,000 men and women served as partisans in 6,000 detachments. There was a central command to coordinate these detachments, and in 1943 they provided some 60,000 rifles, 34,300 submachine guns, 4,200 machine guns, 2,500 antitank rifles and 2,200 mortars along with ammunition and hand grenades.
After the war, the manual continued in publication and was used in several national liberation struggles. The partisan leader, Panteleimon Ponomarenko, lectured at a secret school for Arab revolutionaries at Novoe Nagoronoe some forty miles outside of Moscow, as late as 1974.
The manual is a practical guide to a wide range of guerilla warfare techniques. It covers explosives and weapons used by the Soviets and the Germans and tactics, hiding from aircraft and how to hide and store supplies. It is liberally laced with rich Soviet WW2 language, 'Partisans force the German occupiers always to be on their guard. They do not let the Hitlerite scoundrels rest by day or night, by creating an unbearable environment for them.'
These guides are a handy way of understanding how guerilla warfare was undertaken in WW2. First, remembering this was a particularly brutal conflict, with little quarter on either side.
Posted by Balkandave at 15:56