Turkish Navy in the Cyprus 1974 conflict

I have added a naval dimension to my Cyprus 1974 project. A vital element of the conflict was the ability of the Turkish armed forces to project military power over the sea lanes from the mainland to Cyprus. After the 1964 and 1967 crises, Turkey recognised that its naval capacity was inadequate for the task.

The modern Turkish Navy (Türk Deniz Kuvvetleri) was created in 1920 with a small fleet to defend a long coastline. In 1947 Turkey signed an aid treaty with the United States and joined NATO in 1952. This led to the supply of former British and US ships, which formed the backbone of the fleet. By 1974, these included ex-US Fletcher (five ships), Allen. M. Sumner (two ships) and Gearing class (five ships) destroyers. A strategic aim of producing their own warships led to the Berk class frigate being built at the Gölcük Yard, based on the USN Claud Jones frigate design. The submarine fleet consisted mainly of the ex-US Balao class. The unmodified versions were being phased out in the early 1970s and replaced by conversions to the Guppy IA, IIA and III standards. Ten of these submarines had been acquired before 1974.

The absence of harbours under Turkish control in Cyprus meant the Turkish Navy had to develop a significant landing craft capacity to put troops onto beaches. After the 1964 crisis and the Johnson Letter, the US refused to include landing craft in their military aid package and Turkish efforts to secure them from other sources also ran into difficulties. In 1965, they established a Landing Craft Command (Cikarma Gemileri Komutanliği), initially based at Gölük on the Sea of Marmara, and then moved to Mersin in 1973. Mersin was the naval base closest to Cyprus.

This command included five British WW2 LCTs and 12 locally built landing craft. In 1967, they got around the US restrictions by purchasing two 650-ton landing craft tanks (LCT) from Britain and an 8,500-ton carrier ship from Denmark. They also bought two ex-US LST 511 class Landing Ship Tanks that Germany had converted into minelayer ships and converted them back into LSTs in 1972. Finally, in 1973, they acquired the ex-US Terrebonne Parish class landing ship tank (LST) (USS Windham County, renamed TCG Ertugrul).

Modern naval warfare is pretty complex and often takes place many miles apart. However, this was less of an issue in 1974. The Turkish fleet has WW2 style tasks of defending the landing ships and naval gunfire support for the landings. The Greek Cypriot National Guard only had a few fast attack craft, but there was also the possibility of an intervention by the Hellenic Navy and/or Air Force.
So, I searched for modern naval rules that don't require a science degree! I have settled on Naval Command by Rory Crabb. I'm not saying they are simple rules, and I haven't got into the really modern period yet, but they do appear playable.
So far, I have painted up the Turkish fleet and some aircraft. The models are from Navwar in 1/3000. Four Gearings, two Fletchers, Berk Frigate and LSTs.

The game scenario is the protection of the convoy taking the assault troops to Cyprus from the Turkish port of Mersin. The LSTs are protected by the four Gearing Class destroyers. In this scenario, the military junta in Athens got their way and persuaded the military chiefs that Greece should actively intervene by attacking the convoy with Hellenic Air Force (HAF) jets. Not straightforward because even from Rhodes, Cyprus is only just in combat range for some HAF aircraft types, including the Delta Dagger and the handful of Phantoms that were just arriving.
The first challenge would be finding the convoy. While the Greeks did have reconnaissance aircraft like the RF-84F, they didn't yet have sophisticated radar-equipped maritime reconnaissance patrol craft like the  Orion. I have assumed they did spot the convoy, and three flights arrived. However, under the rules, you still have to detect the enemy ships once on the tabletop, and the first flight failed that test. The second Phantom flight passed and avoided the AA fire to land its bombs on the TCG Kocatepe. Curtains again for that unfortunate destroyer, as in 1974 it was also sunk, albeit by mistake by Turkish aircraft. 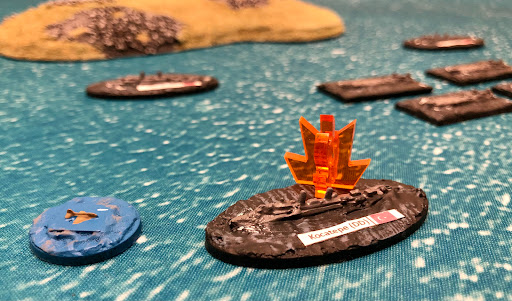 The third flight detected the convoy but was shot down by AA fire as it attacked the leading LST. 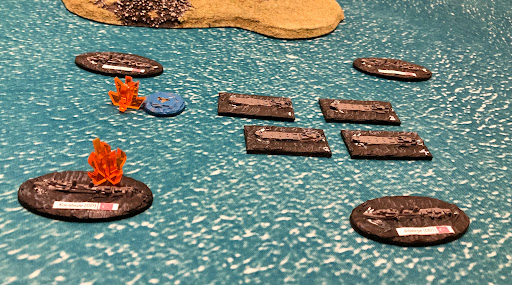 Next up will be the Hellenic Navy, and we can try some surface actions. I also have some post-74 ships, thanks to a less than subtle Xmas present request. Then I suspect I will wish I had studied science rather than law!
Posted by Balkandave at 15:35