Commando Subaltern at War - with the Partisans

As a follow up to reading the semi-official history of 43 Royal Marine Commando, I have been reading William Jenkins' memoirs of his service with this unit in Yugoslavia and later in northern Italy. This is a personal account rather than a broad sweep of the operations.

Jenkins was a replacement officer who joined 43 (RM) Commando on the island of Vis in August 1944. He and others replaced comrades who were casualties during a battle with the Germans on the island of Brac. One of the toughest actions the Special Service Brigade on Vis fought during the campaign. 43 (RM) Commando also lived up to their Royal Marine heritage by providing small boarding parties operating off MTBs and MGBs that attacked German supply boats.

He took part in 'Floydforce' operations in Montenegro, which aimed to support the Partisans blocking the German retreat from the Balkans. His unit landed at Gruz harbour near Dubrovnik a week after the Germans had abandoned the town in October 1944. They headed down to Montenegro to cut off the 21st Mountain Corps, coming up from Albania. They had a battery of eight 25pdrs and a couple of 75mm howitzers to shell the narrow road. There are some excellent pictures of how these were dismantled and carried on mules in the book. Not to mention the 'challenges' of working with mules!

Jenkins goes into more detail about the operations he was involved in, including blocking the inland route to Niksic. He highlights how the locals helped the Partisans repair roads, often with their bare hands, aided by that fine British invention, the Bailey Bridge. He also acknowledges the role of the Balkan Air Force in inflicting damage on the retreating Germans.

The second part of the book covers his role in the assaults around Lake Comacchio in northwest Italy in March and April 1945. This was really a conventional infantry battle rather than a commando operation. He does include an interesting appendix on the Axis opponents, the 162nd (Turkoman) Infantry Division. This division had volunteers from Georgia, Armenia, Azerbaijan, Kazak, Turkestan, Iran, Afghanistan and others. This combination must have created more than a few command challenges. They were collectively called 'Turks', although I doubt the Armenians were much chuffed about that!

This is a valuable addition to my collection of memoirs covering the war in the Adriatic. It includes pictures I haven't seen before, some taken by a Partisan photographer that he managed to track down in a shop after the war. The maps are decent as well.

This reading inspired me to tackle a 1/72 Revell kit of a Croatian Air Force BF-109G that I picked up at a modelling show before Xmas. I am a bit fingers and thumbs with kits, but this one is relatively straightforward and fits together nicely. In addition, the Croatian markings make it a distinctive model for the tabletop. 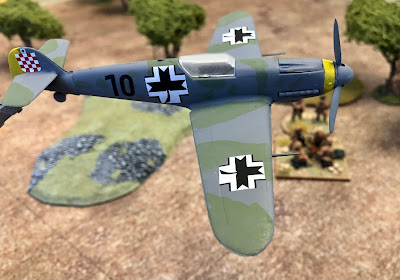 I think it has spotted the Partisan camp! With two 7.92mm machine guns and two 20mm auto-cannon, this aircraft could do a lot of damage. 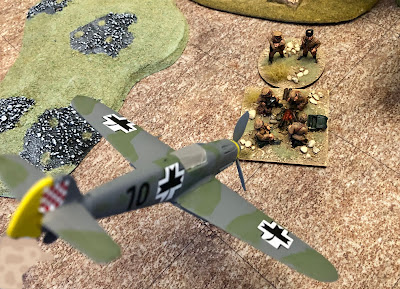