Hellenic Navy during the Cyprus conflict 1974

In 1974 Greek and Turkish troops did engage in Cyprus, but a direct war between the two countries was narrowly averted. The Greek military junta was undoubtedly prepared to go to war, but the military leaders argued that Greece could not win such a conflict. Even when the junta was replaced by the civilian leadership, there was a plan to reinforce the island by sea after the Turkish intervention, when it seemed clear that the Geneva peace conference would fail. Britain and the USA also worked hard to avoid a conflict between two NATO allies that would seriously affect NATO's southern flank. Greece left NATO and didn't rejoin until 1981 over perceived US support for Turkey during the Cyprus conflict. 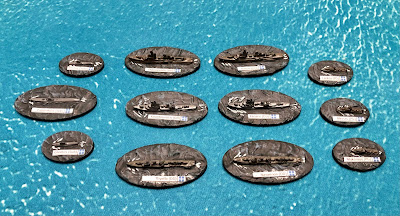 The Hellenic and Turkish navies did not engage during the conflict, but they very nearly did. So, I have been building a Greek fleet to game 'what-if' scenarios. For example, early in the conflict, a Greek convoy assembled at Rhodes but was recalled. This intervention led to the friendly fire incident where Turkish aircraft sank the Turkish destroyer TCG Kocatepe, believing it to be a Greek ship.

In 1974 the Hellenic Navy was equipped with similar US-supplied ships to the Turkish Navy. One of the factors that led to the Kocatepe incident. The last cruiser had been discarded in 1964, leaving destroyers as the major surface ships. There were six ex-US Fletcher Class ships, built in 1942-43 with four 5" guns, six 76mm AA guns and torpedos. They were also beginning to receive modernised WW2 destroyers, one of the Allen. M. Sumner Class and four Gearing Class. They also had four WW2 era ex-US Cannon Class destroyer escorts. The submarine fleet consisted of two ex-US Balao Class and one ex-US Tench Class upgraded to GUPPY configurations. Four modern submarines in the form of West German Type 209 were just completed, known as the Glavkos (Glafkos) Class in Greece. The Hellenic Navy also had a variety of landing ships, corvettes and MTBs.

I decided to go for the Crete convoy scenario for the first tabletop encounter. On 14 August 1974, the Greeks asked Britain to provide air cover for a naval convoy (with a division of 10,000 troops) coming from Crete, as the Hellenic Air Force aircraft had insufficient range to cover such a convoy all the way to Cyprus. The British refused as it believed more Greek troops on the island would simply increase the risk of a direct conflict with the Turkish Army. The Greeks did consider a quick dash under cover of night, although given the distance involved (783km), the convoy would have to travel some of the journey in daylight, exposed to Turkish bombers. The Turkish Navy also had ships tasked with stopping such a convoy from reaching the island.

Unlike the Turks, the Hellenic Navy would have access to ports on the south of the island so could use a variety of ships to transport the troops. They are escorted by two Fletcher and two Gearing Class destroyers for this scenario. Three Greek submarines are also shadowing the convoy. The Turkish Air Force spots the convoy and has a limited opportunity to attack at long range during daylight. Three Turkish Navy Gearing Class destroyers with three submarines plot an interception course.

The addition of submarine and surface warfare was a bigger test of the Naval Command rules I used last time. These fleets are essentially the WW2 era; even the modernisations are pre-missile age, so there was nothing too complex to handle.

The Turkish airstrikes were not very effective. One landing ship crippled but the destroyer escorts survived. 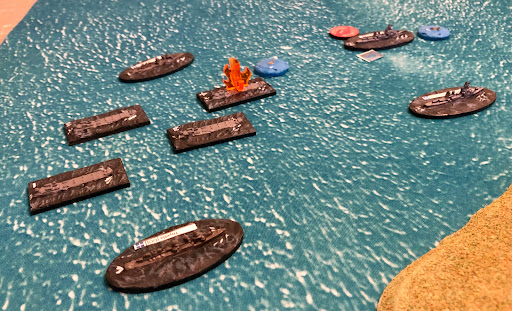 Surface fleet gunfire caused only limited damage, but the submarine attacks were devastating. Two destroyers on each side sink. 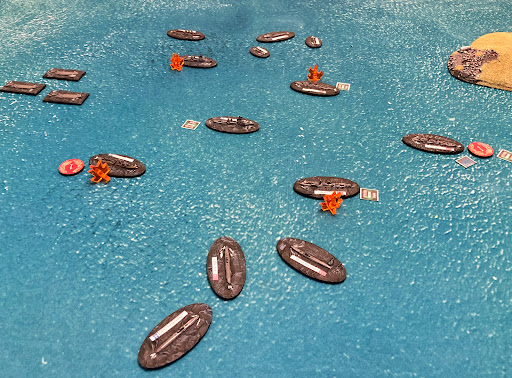 The next move results in another Greek destroyer being sunk by submarines. Time to head back to Crete! 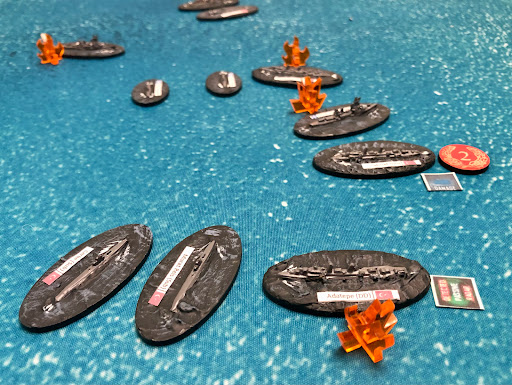 The Naval Command rules were not too complex. Not sure I have understood the number of weapons firing, but otherwise they are playable.
Posted by Balkandave at 17:21