Nothing Much To Lose

This is Michael McConville's history of 43 Commando Royal Marines during WW2. My interest was mainly 1943/44 when they were based on Vis, supporting the Partisans. Much of this story is already covered in Michael's excellent 'A Small War in the Balkans', which covers more than the fighting by 43 Commando. 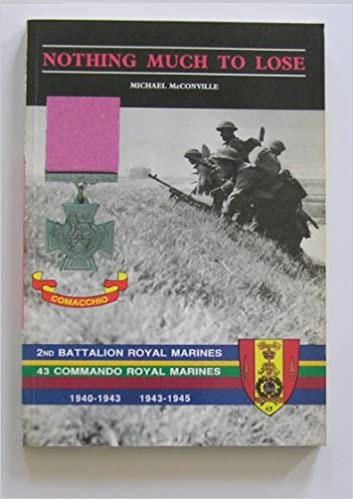 The unit started life as the 2nd Battalion Royal Marines, part of the Royal Marine Brigade formed in 1939. The 2nd Battalion assembled at Bisley on 1 April 1940. The unit first saw action of a sort during the occupation of Iceland. The Icelanders didn't resist, and the action may have been limited to punching the German consulate's wife to stop her burning diplomatic papers!

The following campaign was similarly inactive, although a lot warmer. The Battalion was sent as part of the expedition to the French colony of Dakar (Operation Menace), based on optimistic Free French intelligence. Instead, they ended up in Freetown, where the primary adversary was malarial mosquitos. 34% of the unit became casualties.

Back in the UK and after extensive training, the Battalion was converted into No 43 Commando on 1 August 1943. A commando unit was smaller than a battalion, so some of the troops went to man landing craft. The unit was then sent to the Mediterranean. They served in Algeria, Sicily and then Italy, including the infamous Anzio campaign.

They then joined the Special Service Brigade on Vis. My feature article on this is on Balkan Military History. This book covers the main raids involving 43 Commando on the islands and along the Dalmatian coast. At times there is a shortage of detail. The primary source is the war diaries and I have looked at some of these myself in the National Archives. All I can say is that writing the war diary was clearly not a popular task for whoever got lumbered with it in any of the commando units. In fairness, I doubt you volunteered or were selected for a commando unit for your writing skills!

After Vis they went to Montenegro as part of Finneyforce, which was tasked with supporting the Partsians who were challenging the German retreat through the Balkans. There is a particularly interesting action aimed at supporting the Partisans blocking the coast road along the Bay of Kotor at Risan. The Germans used the old Austro-Hungarian forts at Ledenice, which may have been old but had six foot thick walls. A combination of British artillery, air attacks and Partisan ground operations managed to block the route, forcing the Germans inland. Kotor Bay is one of my favourite places on earth and I have driven along this road. It would require a lot of scenic work to set it up for a game, but I am now considering it for a future display game.

43 Commando's final operation was at Comacchio in Italy, as part of 2nd Commando Brigade on 1 April 1945. This was a feint operation to draw the Germans away from 15th Army Group's main attack through the Argenta Gap. The Brigade succeded in capturing their objective, a spit of land on the lagoon and destroyed the German force defending it. In many ways this was a conventional infantry attack supported by armour. Corporal Thomas Hunter, of 43 Commando, earned a posthumous Victoria Cross for conspicuous gallantry in this battle. The only VC to be won by the Royal Marines in WW2.

If you are interested in commando operations, this is an excellent addition to the library.