To bring my Turkish forces up to date, I have been working on a Modern Bolt Action platoon for the current land forces of Turkey or Türkiye, as we should now call the country.

The figures are 20mm from the Elhiem range, mainly from the US codes, which are the nearest to the latest infantry uniform and equipment I could find. 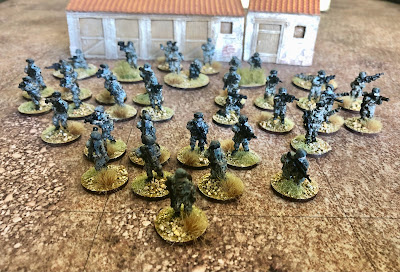 A modern Turkish infantry squad has two fireteams of four men each and a squad leader, an NCO (Astsubay Çavuş). They have a variety of weapons and equipment. Typically all have the Turkish MKE MPT-76 Assault Rifle, a pistol, grenades and protective gear. Additional firepower comes from the MKE PMT-76 General Purpose Machine Gun, and one squad member is the designated marksman with a sniper rifle. Anti-tank capability comes from the MKE Carl Gustaf M4 and the ROKETSAN KARAOK Fire-and-Forget ATGM. 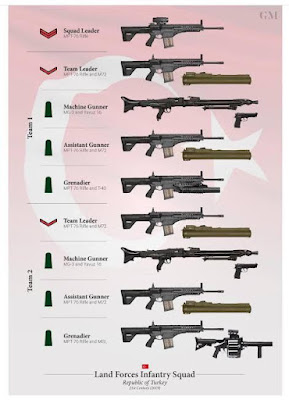 Here is a close up of a typical four-man fireteam. 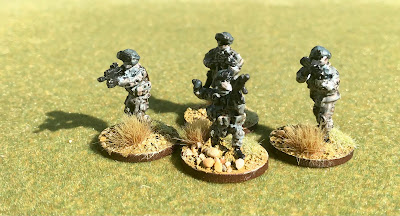 Each squad would have an APC in a mechanised unit. I have M113s from the Cyprus 1974 units, which are still in service. However, for these state of the art infantry, I really need three ACV-15s. These are Turkish manufactured APCs based on the American Advanced Infantry Fighting Vehicle. I can't find anyone who makes a 20mm model of this, but the Dutch YPR-765 is a similar derivation, and Butlers does a 3D print model. I have a Leopard to upgrade the armour from the Turkish M48 I have, but it will need a repaint.
For my mini-battlegroup, I needed some specialists. So here we have a command group, sniper team, MG team, SAM and spotter. 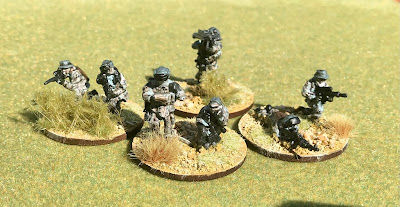 For opponents, I have various East European insurgent types, Russians and a few YPG (Kurds). Really need some Greeks or Cypriot National Guard, but other projects need to be finished first. Famous last words!