One of my current projects is a close dive into the Napoleonic wars in the Adriatic. The Kingdom of Italy, created by its King, Napoleon, in 1805, covered not only northwest Italy but also most of the Dalmatian coast. However, it surrendered the Dalmatian territories to the newly created Illyrian Provinces, under Marshall Marmont, in 1809.

Stephen Ede-Borrett has written a new book for Helion, which covers the uniforms, organisation and campaigns of the Kingdom. 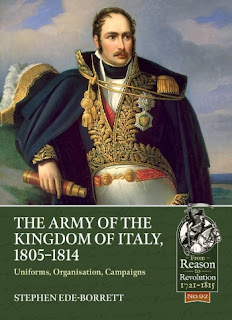 While there is an introduction and a potted history of the Kingdom lifted from the Encyclopedia Brittanica, this book is primarily about the units and their uniforms. The Italians tend to get a bad rap in Napoleonic wargame rules, certainly in morale rules, which I am not entirely convinced is deserved. Some of my research into the smaller campaigns and sieges on the Adriatic coast appear to show that they were no less robust than French troops. I used to play the Napoleonic fantasy game Flintloque, and the Italians were depicted as toads, which says it all about stereotypes!

The Army of the Kingdom of Italy, not to be confused with the Army of Italy, included some colourful uniforms. In fact, I painted a 28mm unit for my French army only because I was bored painting French line regiments. The Royal Guard was a mini Imperial Guard with all the elements of a French army corps, and they saw extensive service with the viceroy, Napoleon's stepson Eugene. For each unit, you get a history of its organisation and then the uniform and how it developed over the period.

The line regiments had dragoons and light horse (Cacciatori a Cavallo), who saw service in almost all the main campaigns. The infantry of the line (six regiments) was organised like the French line infantry and again saw service almost everywhere. There were four light infantry regiments and an array of other units, including the Dalmatian Legion, that I recently added to my 28mm French force. Others, like the Bersaglieri di Brescia, were mainly deployed locally. The army also had artillery, engineers and other support units. The book doesn't include the Kingdom's navy but does include several naval units that served on land.

As you would expect from a Helion book, it is lavishly illustrated. The colour plates are by Henri Boisselier (1881-1959) and provide all you need for painting purposes. I am very tempted to do the 4th Cacciatoria a Cavallo Colonel, in pink trousers and shako! If you want to collect an army of the Kingdom of Italy, this is the book for you. Otherwise, probably a bit specialised for the general reader.