This is the latest in my re-read of Nigel Tranter's novels. This one is again based on Alexander III's period, although, unlike Crusader, this takes the story on to his adult rule. I can't say Alexander III rates as one of the great King of Scots, or that his period of rule is that interesting, so I am not sure why Tranter wrote three novels of the period. 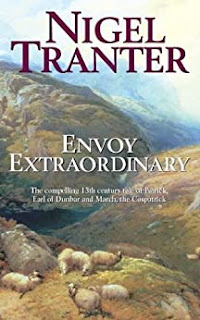 This part of the story is told through another actual historical figure, Patrick, 7th Earl of Dunbar and March, known as The Cospatrick. Like a lot of Tranter's characters, he is portrayed as someone who wanted to steer clear of the nation's affairs and just quietly get on with running his estates. Unlike most great lords, Patrick was very interested in trade, and this features heavily in the story. It gives an excuse to have Patrick travel to Norway, Denmark, the Low Countries and France.
The title comes from his travels as an envoy for King Alexander. He was something of a diplomat in the modern sense. There is one major campaign in the period, King Hakon of Norway's assault on the west coast of Scotland, which was halted at the Battle of Largs in 1263. Hakon died shortly afterwards and the Treaty of Perth brought the Western Isles and the Isle of Man under the Scots crown. This was probably the major achievement of his rule. The English were somewhat distracted during this period with the Barons War and Alexander was married to Henry's daughter.
Alexander's family life was tragic. Not only did his lose his wife but also all his children and even his grandchild who was the last hope for the succession. He died himself riding over a cliff in Fife, leaving no heir. This led to Edward dabbling in Scotland and the start of the wars of independence with Wallace, Bruce et al.
It's a decent read, but not exactly a page turner.