I have been looking at a little-covered episode in the Napoleonic Wars, the presence of a significant Russian fleet in the Mediterranean, specifically the Adriatic. I have been helped by two books, one old and one new on the subject.

I picked up a pristine copy of Norman Saul's 1970 book 'Russia and the Mediterranean 1797-1807'. This covers the early period when the fleet was commanded by Vice-Admiral Ushakov. It included six ships of the line, seven frigates and three brigs. The focus of Russian attention was the Ionian Islands, headquartered in the great fortress at Corfu. This book is a concise description of the campaigns against the French in the context of the major conflicts in central Europe and Italy. The Russians had major challenges, not least when relations with the Ottomans were poor, as they often were. During these periods, the Straits would be closed, and the Russians either relied on allies or had to move ships and supplies all the way from St Petersburg.

The second book was written by a Russian naval officer, Vladimir Bogdanovich Bronevskiy, who mainly served on the Frigate Venus as part of Vice-Admiral Senyavin's fleet during the period 1806-1810. Darrin Boland has done an excellent job translating and lightly editing his memoirs in 'Northern Tars in Southern Waters', published by Helion. 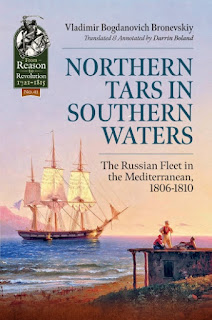 Naval warfare in the Adriatic mainly was a small ship war, and the Russians had frigates like the Venus that engaged French supply convoys and intercepted neutrals. In May 1806, The French General Molitor was travelling from Venice to Trieste when his merchant ship was intercepted. He managed to persuade the Russian captain that he was an Austrian merchant. The fact that he carried papers to support this claim indicates that this was not a one-off precaution. Russian commanders, like their Royal Navy counterparts, had to use their own initiative being weeks away from command centres in St Petersburg.

The Russians had far more ships of the line in the Adriatic than other navies, and these were mainly used to support operations on land. Typically the fleet would attack a French garrison and knock out the defender's artillery before Russian and Montenegrin troops would land and capture the island. The Montenegrins and the Bokez (citizens of the Bay of Cattaro) were sympathetic to Russia and provided excellent, if ill disciplined, light infantry. The only significant fleet action was against the Ottomans at the Battle of Athos.

The Russian fleet was generally very effective, but as was often the case events elsewhere intervened. The Treaty of Tilsit resulted in Russia abandoning much of its Adriatic possessions. Tilsit meant Senyavin was stranded in the Mediterranean without a base. He couldn’t go back through the Straits so he sent the troops home via Trieste and Austria, scuttled or sold some ships, and sailed the rest back towards the Baltic. He was blockaded by the British in Lisbon, and only two ships made it home in 1813. A sorry end for one of Russia’s finest fleets that had operated successfully in the Adriatic.

For the wargamer, the Adriatic offers plenty of opportunities for naval and land operations at a manageable scale. Right on time, Warlord have brought out a supplement for their Black Seas naval rules, Hold Fast. They include chapters on the Russian and Ottoman navies, as well as most of the other minor naval powers. There are lots of new scenarios for smaller games, including the use of galleys and xebecs in the Meditteranean. 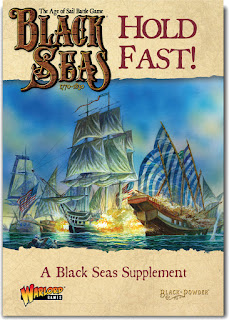 This looks excellent and I hope to try a few games this weekend. I have some Russian ships on the painting bench to do battle with my Ottomans and French.