Kashmir at the Crossroads

I needed a book for a couple of flights and a layover this week. I have been reading many military history books about the Pakistan-India conflicts, and the key theme is Kashmir. So, a deeper dive is required, and who better for an objective study (if anyone on the sub-continent can be!) than Sumantra Bose. I was drawn to this book after listening to a podcast interview of his Kashmir at the Crossroads a while back. 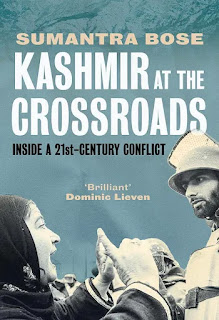 The Kashmir conflict is the most stubborn territorial dispute between India and Pakistan since partition. The territory has been divided into a larger and much more populous part under Indian authority and a smaller part in Pakistan. The dividing line was known as the Ceasefire Line (CFL) from 1949 until 1972 and relabelled as the Line of Control (LoC) by an intergovernmental agreement in July 1972. The Kashmir conflict has been the bane of the subcontinent and the cause of at least three wars between the two countries and many smaller-scale conflicts. Since 1990, at least 60,000 people have been killed in civil unrest.

Sadly, the root cause of the conflict was created by the British decision at partition to allow the princely states to decide which country they went into. Kashmir had a Hindu ruler but a Muslim majority population. There was supposed to be a plebiscite under UN supervision, but that never happened despite Indian commitments. This is why the region remains a contested zone.

In this context, the wars and insurgencies that followed all seem pretty obvious. However, there are nuances that I hadn't appreciated. For most of this period, most of the Muslim population did not support joining Pakistan. Their favoured option was an independent state or at least significant autonomy. It is doubtful how practical the first option was, even though it was a theoretical option at partition. The Indian Government deposed the region's premier in 1953 when he pressed for maximum autonomy, and it's been downhill ever since. Rigged elections and government-appointed stooges removed any local accountability, and insurgency has been the consequence. As Jaya Prakash Narayan, a prominent Indian opposition leader put it: ‘We profess democracy, but rule by force in Kashmir. We profess secularism, but let Hindu nationalism stampede us into establishing it by repression. Kashmir has distorted India’s image in the world as nothing else has done. The problem exists not because Pakistan wants to grab Kashmir, but because there is deep and widespread discontent among the people.’

The current situation has brought China into the equation. China has two border disputes with India. The Aksai Chin/Ladakh area bordering western Tibet in the western Himalayas, and the North-East Frontier Agency or NEFA region in the eastern Himalayas. The irony of China supporting dispossesed Muslims when they persecute the Uighurs, should not be lost on anyone. Pakistan’s leaders, civilian and military, have long referred to China as Pakistan’s ‘all-weather friend’.

In 2019, legislation promoted by the nationalist BJP government opted for an ultra-centralist approach by revoking the status of the region as a constituent state of the Indian Union and dismembered it into two ‘union territories’. The hammer-and-axe offensive unleashed on 5 August 2019 took repression to a surreal level and turned the Kashmir Valley, in particular, into a real-life approximation of George Orwell’s Nineteen Eighty-Four. It was somewhat akin to what Serbia’s Milosevic regime did in 1989 by unilaterally revoking Kosovo’s autonomy. That didn't end well and the current repression has been a disaster for the people of the region and risks a three-way conflict in the future.

This book is a detailed narrative of the conflict in Kashmir at its various stages. The internal politics are complicated, but the wider implications are serious. There is a significant amount of repetition, and referencing back, which is useful if you dip into the book, but irritating for a straight read. Otherwise, it provides all you need to know. I should emphasise this is a political history, the military aspects are better covered in the Helion Asia@War series. Kashmir is a grim lesson in the ruinous potential of nationalism, or in this case nationalisms competing for supremacy.