This book by Graham Robb is about a stretch of land on the England/Scotland border called the Debatable Land. For several centuries this desolate tract of land, of around 50 square miles, was treated as a sort of no man's land where by parliamentary decree, "all Englishmen and Scottishmen are and shall be free to rob, spoil, slay, murder and destroy, all such person and persons, their bodies, property, goods and livestock.... without any redress to be made for same." 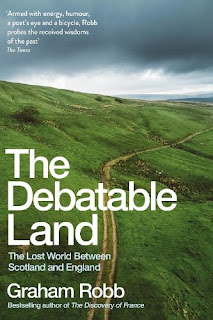 Like most borderlands, during this period, the border between England and Scotland was a pretty violent place, subject to what was known as reiving, essentially cross-border raids. Flags of War have a Kickstarter that I have signed up for with rules and figures covering the Border Reivers. I have struggled with the main histories of the period, including Steel Bonnets, so I thought I would have another go with this book.

The author moved to the area, so this is a bit of a travelogue and a history. I did find the structure of the book a little hard going, but there are plenty of gems to make the journey worthwhile. For example, the word 'blackmail' comes from the protection money paid to a powerful neighbour who assumed the responsibility for getting back your stolen goods by organising a 'hot trod'. Also, 'bereaved' which initially simply meant robbed. The phrase 'debatable lands' comes from 'batable', which meant pasture lands used by both nations. It was not disputed but recognised as neutral by both governments.

There were no permanent buildings or fortifications, but the border clans, most notably the Armstrongs and Grahams, had property on either side and frequently contested each other. These were no castles as such but tower houses called Pele Towers. There were few sieges, but the word 'scumfishing' meant surrounding the tower with damp straw and smoking the occupants out. Just outside the Debatable Land is Hermitage Castle, as stark and functional as a castle that I have ever visited. It was most famous when Mary Queen of Scots made a famous marathon journey there on horseback from Jedburgh to see the wounded Earl of Bothwell, only a few weeks after the birth of her son. 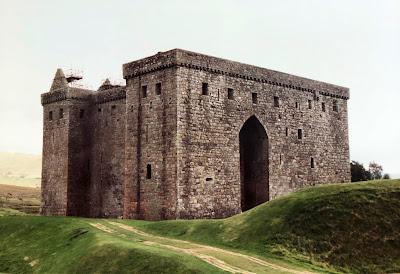 The first proper map was drawn by Henry Bullock, and it looks like the sort of fantasy map I might draw using Inkarnate. It was used to divide the land in 1552, marked by parallel ditches, which can be seen today. This marked the end of the independent territory, and each nation took responsibility for its own portion. It effectively ended with the joining of the crowns under King James VI (1st of England). He also decided to end lawlessness more generally within the borders. He hung many using what was known as 'Jeddart justice', the practice of having a trial after the execution! Some of the most troublesome clans found themselves shipped off to Ireland, including many Armstrongs and Grahams.

This isn't a history of the borders like Steel Bonnets, but you can pick up a feel of what it was like to live there during this period. Ideal for small skirmish games, although at times, up to a thousand horsemen would take part in raids. They were also a feature of the Scottish and English armies of the period. I am looking forward to getting the new figures on the table when the Kickstarter arrives.